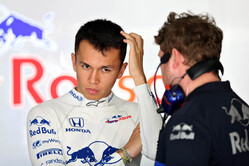 Although Formula One is currently on its mandatory break, Alexander Albon took to social media late tonight to comment on his move up to Red Bull to replace Pierre Gasly as Max Verstappen's teammate from the Belgian Grand Prix.

"Surreal to have been given this massive opportunity Red Bull Racing," he tweeted. "Can't thank you enough for believing in me and making this possible.

"It's a big jump into the deep end, but I've got my swimming shorts on!" he added.

"Thanks to all the guys at Toro Rosso, especially Franz Tost for the massive opportunity in F1 and never-ending support throughout my first year!

"Now to focus for my first race with the team in Spa."

While the Thai youngster has impressed this season, there are many who feel that he needed more experience under his belt before such a move, especially as Red Bull is not known for its patience.

Gasly returns to Toro Rosso where he will partner Daniil Kvyat, a man who knows from bitter experience how unforgiving the Austrian team can be.