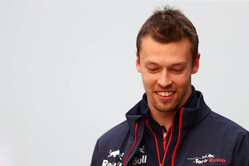 "Thanks guys... that wasn't a very good job to be honest," said Alex Albon in the moments after crossing the line to claim fifth on his debut for Red Bull, the Thai driver benefitting from Lando Norris' retirement on the penultimate lap and a risky move on Sergio Perez in the final seconds of the race. "I struggled really at the start," the Red Bull driver added.

"I don't know why you call it such a good start," the Russian told reporters. "He spent thirty-six laps behind me in a Red Bull, and he started in front of me as well. I don't know, maybe in the future he will do better.

"We were fighting the whole race in Spa," added Kvyat, who finished seventh. "If he had stayed at Toro Rosso then yes, it would have been an amazing race for him, but he was in a Red Bull…

"I'm just commenting on what I saw," he insisted. "Maybe it was the maximum, probably it was the maximum that the car could achieve that day. But the fact that we were fighting and I held up a Red Bull for most of the race in Spa, where the car really matters a lot, behind me, it was a very pleasing race for me to be honest."

"It was tricky," said Albon of the Perez pass, which was investigated but cleared by the stewards, "but I kind of expected it because it was the last lap and you're always a bit more aggressive on the last lap.

"He moved across, it was marginal, definitely, but as we said in the stewards' no harm was done. It was close and in other circumstances that would have been a bit too aggressive but because it was a dry track and there was a run-off, I was on the tarmac section and all that kind of thing, it wasn't too bad."