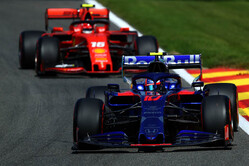 Franz Tost (Team Principal): "Sadly today, motorsport has experienced a tragic loss with the passing of Formula 2 Driver Anthoine Hubert. This is a terribly sad moment for the entire motorsport community. On behalf of Scuderia Toro Rosso, I would like offer our deepest condolences to his family and friends at such a difficult time. Our thoughts are also with Juan Manuel Correa in the hope that he makes a full recovery."

Jody Egginton (Technical Director): "The team is shocked by the news that Anthoine Hubert has passed away following his accident in the Formula 2 race. It has shaken the motorsport family and all our thoughts are with Anthoine’s family and friends at such a tragic time.

"As for our Qualifying, the setup changes we made overnight had improved the car and as such, we were able to set more competitive lap times in FP3. Although Dany was not able to close his best lap due to encountering some traffic, Pierre did, and we went into Qualifying with the expectation of having a reasonable performance.

"Unfortunately, this has not been the case. Following poor first runs from both cars due to an issue with Dany's car, and Pierre struggling with tyre temperatures, there was no opportunity to improve with the second runs due to the red flag. We now have a lot of work ahead of us tonight to try and recover as best as we can from the situation we find ourselves after Qualifying, making sure we are in a position to maximize any opportunities which may come our way."

Toyoharu Tanabe (Honda F1 Technical Director): "We are deeply saddened to learn of the death of Anthoine Hubert on the opening lap of the F2 race this afternoon. On behalf of the Honda Motor Company, I offer our sincere condolences to his family and friends. Our thoughts are also with Juan Manuel Correa, injured in the same incident."

"The two Toro Rosso cars got no further than Q1, unable to do their quickest lap because of the red flag after Giovinazzi had a problem. Kvyat was using the new Spec 4 PU as from yesterday, which means they have to start from the back of the grid, so today, they focussed mainly on race preparation rather than qualifying. This will be our first race running Spec 4 on what is a very demanding track for the PU, so our first target is to finish the race with all four cars. This is a track where overtaking is possible, so we hope they can move up the order."