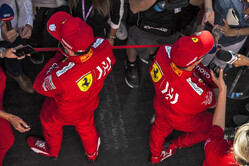 This Sunday's race will be the 90th Italian Grand Prix, of which the last 69 have counted towards the Formula 1 World Championship, it and the British Grand Prix being the only races to have featured in every year of the championship. With the exception of 1980, when the event was run at the Autodromo Dino Ferrari at Imola and won by Nelson Piquet in a Brabham, it has always been held at the Autodromo Nazionale di Monza. Over the years, Scuderia Ferrari has won 18 times, taken pole on 20 occasions and had its drivers on the podium 68 times.

Before the Monza weekend gets underway, Sebastian Vettel and Charles Leclerc, along with Team Principal, Mattia Binotto will be in Milan's Piazza Duomo on Wednesday afternoon as from 5 pm, for an event open to the public, organised by the Automobile Club d'Italia (ACI) to celebrate the ninetieth edition of the Italian Grand Prix and 90 years of Scuderia Ferrari. There's a packed programme with Ferrari drivers past and present, as well as the youngsters from the Ferrari Driver Academy representing its future, on stage in the square. There will also be a display of Scuderia Ferrari cars old and new as well as a selection of road cars built by the Maranello marque.

Ever since the demise of the old Hockenheim, Monza remains the only truly high speed Formula 1 track, although Spa-Francorchamps has its own unique place. Originally, the long straights had none of the chicanes that make up its current layout and the track witnessed some of the closest racing ever, with dozens of passing moves on every lap, thanks to the ability to slipstream the cars in front. The most memorable finish came in 1971, when Peter Gethin won for BRM, crossing the line just one one hundredth of a second ahead of Ronnie Peterson in the March. In fact all top five finishers were covered by just six tenths. Such a high speed track was inevitably the scene of tragedy, most notably the deaths of Alberto Ascari, Wolfgang Von Trips, Jochen Rindt and the aforementioned Ronnie Peterson.

Scuderia Ferrari's first win in Monza actually dates back to pre-Formula 1 days when the Italian team raced Alfa-Romeos. In 1933, Luigi Fagioli won and once the World Championship was set up, the Maranello team won in 1951 with Alberto Ascari, followed home by team-mate José Froilàn Gonzalez in the 375. The Italian won again the following year, but that was it until 1960 when there was an easy win as the British teams boycotted the race to protest against the use of the high-speed oval, built in 1955, which was considered too dangerous. Ferrari took a clean sweep of the podium with Phil Hill, Richie Ginther and Willy Mairesse. The following year saw a full grid but it ended in tragedy. Von Trips collided with Jim Clark's Lotus and lost his life along with 14 spectators. Phil Hill won in the 156, becoming the first American to win the world title.

In 1964, it was the turn of John Surtees to take the win for Ferrari, as he dominated the race in the 158 after dealing with an initial challenge from Dan Gurney. The win propelled the Englishman back into the fight for the title, which he won in incredible style later in Mexico. Two years later there was an equally important victory for Ludovico Scarfiotti, with Mike Parkes making it a one-two at the wheel of the 312, which was a highpoint in an otherwise lacklustre season.

After three blank years, Scuderia Ferrari was back in the winner's enclosure in 1970 thanks to Clay Regazzoni who just managed to get the better of Jackie Stewart on the final lap. Five years later, the Swiss did it again on what was a great day for the whole team: Niki Lauda finished third which was enough to finally bring the drivers' title back to Maranello, eleven years after Surtees. The same pattern repeated itself four years later, when just beating team-mate Gilles Villeneuve to the line, Jody Scheckter had done enough to secure the drivers' crown ahead of the end of the season.

It's been 40 years since Scheckter's win and it marked the start of a long barren period for Scuderia Ferrari at Monza. The 1988 event started as a sombre affair for the team as it was the first race since the death of Enzo Ferrari in August that year. In qualifying, the McLarens of Alain Prost and Ayrton Senna, who between them had won every previous round that year, locked out the front row. The Frenchman retired from the race with a mechanical problem, while the Brazilian ace seemed to be heading for an easy win. However, with three laps to go, Senna came up behind the Williams of Jean-Louis Schlesser, a lap down. The Frenchman appeared to move over for the race leader, but they collided and Senna had to retire. That left the way clear for a Ferrari one-two, with Gerhard Berger winning ahead of Michele Alboreto. A few days later, some journalists wrote that Enzo Ferrari had looked down from above and orchestrated Schlesser's move!

It would take a further eight years before a Ferrari driver was back on the top step of the podium in Monza. The win came in 1996 courtesy of the great Michael Schumacher, who did it again at this track in 1998 with a brilliant passing move on Mika Hakkinen at the Roggia chicane. In 2000, Michael equalled Senna's record number of wins and was unable to hold back the tears during the post-race press conference. There were two more wins in 2002, when Rubens Barrichello had to come through from the back of the grid after choosing the wrong tyres and then another win for Schumacher in 2004, the German having to recover from a spin at Roggia.

The most recent victory for Ferrari at Monza came courtesy of Fernando Alonso. In 2010, the Spaniard, who had already won in 2007, fought a long duel with Jenson Button, who eventually had to give best to Fernando and the abilities of the F10. There have been no more wins in the Italian Grand Prix since then, but last year, Kimi Raikkonen went into the Formula 1 record books in qualifying. At the wheel of the SF71H, the Finn took pole position at an average speed of 263.587 km/h, the quickest average speed in the history of the top racing category.

Sebastian Vettel: "Racing in the heart of the tifosi in Italy, around Monza, certainly means a lot to me with my first win dating back to 2008 which was powered by Ferrari, not yet in the Ferrari car. That´s what we are aiming for. I think we got closer and closer in the past years, but we were missing that final step.

"Looking at the track, it is very unique. You are racing with low downforce, you have got a lot of long straights and therefore it is difficult. The car is quite light and is moving around, with little wings on the car it is difficult to find the right braking spots. There are tight and narrow chicanes, it is tricky to find the right amound of kerbing.

"It is not an easy one to set the car up for but if you do, and you get the car in the right place, it can make you really happy when you find the rhythm."

Charles Leclerc: "We are celebrating 90 years of Scuderia Ferrari as well as the 90th edition of one of the most iconic races on the calendar, the Italian Grand Prix in Monza, this weekend.

Since I was a child, it has been my dream to be part of the most mythical team in Formula 1, so it will be very special to drive the red car at our home race for the first time.

The circuit is famous not only for its long straights, but also for its corners, especially the two Lesmo corners and the Parabolica. Our straight-line speed has been one of the strengths of our car so far this season, and we will work hard to put everything together and extract the maximum around all parts of the track. We will give our best to make our tifosi proud and hopefully bring home a good result."

Mattia Binotto, Team Principal: "It's time for our home Grand Prix and there can be no better way to come to Monza than as the winner of the last round in Spa-Francorchamps. It's a great thank you to our fans who have given us so much support during what has been a far from easy season so far.

"Monza is a track where we run at very high average speeds, featuring long straights and heavy braking, running a low downforce package. This weekend, we plan to introduce our third power unit.

"We saw in Belgium that, in order to win, we must do everything to perfection and our aim is to do exactly that in Monza too. There will be no room for error. Our home race is always important, but that is especially true this time, as we are celebrating 90 years of Scuderia Ferrari.

Racing in front of our home fans is always an extra boost and further motivation to do well. Apart from anything else, there is no podium quite like Monza and we think there is no better crowd than the Italian one."