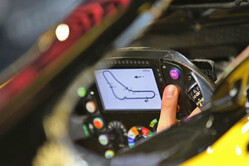 For Pirelli's home grand prix at Monza, the C2 has been chosen as the white hard tyre, the C3 as the yellow medium tyre, and the C4 as the red soft tyre: the most common combination seen so far this year. This selection is the best compromise to cope with the varying demands of the 'temple of speed', which over the years has had some slower and more technical sections added to the rapid straights and corners that built Monza's reputation: the venue that has hosted more grands prix than any other.

This year's choices are broadly similar to last year, when medium, soft and supersoft were selected. The only difference is that the current C4 is softer than the 2018 supersoft, while the C2 is also a little softer than last year's medium. As usual, the data from previous years is a key factor when it comes to selecting tyres for races.

Teams run the lowest downforce possible at Monza, to maximise top speed on the long straights. This means that the tyres have to provide maximum mechanical grip through the corners, and that understeer can also sometimes be an issue: also because teams aim to protect the rear tyres in order to optimise traction.

The weather is usually dry and warm at Monza, but last year there was intermittent rain during Friday and Saturday, which made the usual job of data collection quite tricky.

Last year, Lewis Hamilton won the race from third on the grid with a one-stop strategy, which was used by the majority of competitors. He pitted later than polesitter Raikkonen and then used the advantage of fresher tyres to make a move for the lead later in the race.

There are some big kerbs that the drivers hit very hard: especially at the Rettifilo and Roggia chicanes. This means that the structural strength of the tyres is an important factor.

A number of celebrations are planned leading up to the Monza weekend: on September 4, Ferrari and ACI (the Italian motorsport federation) will jointly celebrate 90 year of Ferrari and the 90th Italian Grand Prix to be held at Monza, with a parade and festival at Milan's Piazza Duomo.

Mario Isola: "Monza is still a huge challenge for drivers, cars and tyres: a bit like Spa, who took place last weekend. Unlike last year though, we don't have the same tyre nomination for both races. While Spa featured harder tyres compared to 2018, at Monza the softest choice is slightly softer than last year. With the fastest-ever lap in Formula 1 history set in qualifying at Monza last year, and a tendency for the cars to be even faster this year, we might see more history being made this weekend. While Monza is traditionally renowned as a place where it's hard to overtake, last year's race also showed how tyre strategy can make an important difference. For the last two years it has rained at some point during the Monza weekend as well, adding another variable to what is always a very closely-fought race with small margins."