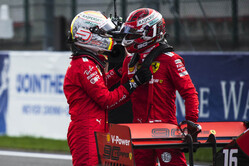 Charles Leclerc and Sebastian Vettel will line up on the front row of the grid for the 64th Belgian Grand Prix, having dominated qualifying at the Spa-Francorchamps track. Charles was quickest with a time of 1'42"519, to secure his third career pole, after doing the same in Bahrain and Austria. This is Scuderia Ferrari's 223rd pole, the 14th in Belgium.

Charles and Sebastian only needed the first run on Softs to make the cut into Q2, first and second fastest respectively. The Monegasque did a 1:43.587 and the German did a 1:44.109.