Ferrari and the ACI to hold Milan event 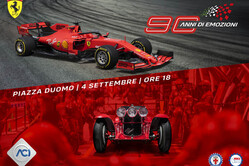 Two names that have made history in the motor sport world, the Automobile Club d'Italia (ACI) and Scuderia Ferrari are getting together for two important anniversaries.

On the afternoon of Wednesday 4 September, in Milan's Piazza Duomo, ACI will celebrate the 90th Italian Grand Prix at the Autodromo Nazionale di Monza and, for the occasion, by special invitation, Ferrari will commemorate its 90 years since being founded.

The event, to be held in the heart of the city, will tell the story of the Italian Grand Prix at the Monza track along with the history of Scuderia Ferrari.

Cars from all eras will be on display, some of them taking part in a parade starting from Piazza Cordusio.

Amongst the cars will be the Alfa Romeo 8C driven by Tazio Nuvolari, the first driver to ever win a race for Enzo Ferrari's team, the 1940 Auto Avio Costruzioni, the very first car built by Ferrari after the end of the Alfa Romeo relationship as well as Chris Amon's 312 F1, Niki Lauda's 312 T, Gilles Villeneuve's 126 CK and Michael Schumacher's F2002.

Also on show will be the 488 GTE which won this year's Le Mans 24 Hours, the 1986 prototype IndyCar and a host of Ferrari road cars.

The Automobile Club d'Italia, Italy's governing body of motor sport, has been at the forefront when it comes to promoting racing and ensuring the continued future of the Italian Grand Prix.

The ACI will be in the Piazza Duomo, along with the AC Milano, organisers of the Italian GP and SIAS (Società Incremento Automobilismo e Sport), to celebrate this important and prestigious anniversary, which would not have been possible without the determination demonstrated by ACI President Angelo Sticchi Damiani as he fought to ensure Monza's future as one of the cornerstones of the Formula 1 World Championship calendar.

The anniversary celebrates the past, but it is also a starting point in ensuring that the future of the sport remains at the “Temple of Speed”, one of the best loved circuits for drivers and race fans all around the world.

Ferrari's history is not just about its great cars, it is also about the drivers who have raced in them. Many will be in Milan to meet the fans and recall some of their greatest moments with the Prancing Horse.

If they represent the Scuderia's glorious past, then the students of the Ferrari Driver Academy hope to be its future. Seven talented youngsters competing in Formula 1's feeder series will also be participating: Mick Schumacher, Callum Ilott and Giuliano Alesi (Formula 2) and Robert Shwartzman and Marcus Armstrong (Formula 3).