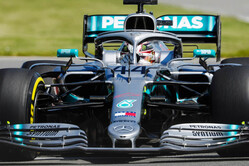 Last weekend saw all six Mercedes-powered drivers issued with the latest spec power unit, all without penalty other than Lance Stroll who suffered an earlier failure in Canada.

However, both Robert Kubica and Sergio Perez suffered high profile failures and as a result reverted to the old-spec, raising fears that the new unit may have inherent reliability issues.

"We kind of understand a little bit," Told Wolff told Motorsport.com, the spec-3 units of Perez and Kubica having been returned to Brixworth for forensic examination.

"We've had five days of looking at things, and we have indications of what happened," he continued. "Obviously with these things you can mitigate some of the risks, but it's not completely analysed in the end."

Asked if the failures meant performance might be compromised this weekend at Monza, he admitted: "That is not yet totally clear.

"We will know more when we have run them. It's still an unknown, we need to run them in FP1."

As for Perez and Kubica reverting to the old-spec, he said: "We wouldn't be able to put the new ones together in time. It's a capacity problem. There were only six. Some spares, but not enough."