Mercedes not expecting an easy weekend in Monza 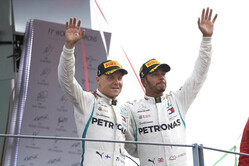 Looking at the timesheets, for much of the Spa weekend, for once Toto Wolff was almost justified in playing the underdog card, the Austrian admitting after qualifying that Ferrari's pace was "ridiculous".

And as the 'circus' heads to the Autodromo Nazionale Monza, the ultimate in power circuits, the so-called Temple of Speed, and Ferrari's home track, Wolff admits that he's expecting more of the same.

"From a performance perspective, our weekend in Spa gave us plenty to work on," he admits. "We were out-qualified and, while our race pace looked promising, we didn't manage to take the win.

"However, given our performance in Belgium last year, it felt like we had also made a step forward," he continued. "We don't have the fastest car in a straight line this year but we made some progress with regards to the slow-speed corners and the way our car handles the tyres. So there are positives to take away from Spa as well.

"We don't expect the Italian Grand Prix to be an easy weekend," he admits. "Monza is 'the' power circuit in F1, that rewards high power and low drag.

"While we have had the fastest overall package on the grid this season, it's not ideal for a track where straight line speed is a key performance differentiator.

"However, we've also seen that the Ferraris look mighty at high-speed tracks on Saturdays, but don't look quite as strong on Sundays - and that's when the points are won. We will not be favourites in Italy, but we will do everything we can to take the fight to the red team this weekend.

"Monza is a very special event thanks to the historic track and the fantastic atmosphere; you don't have to be a Ferrari fan to appreciate the great passion of the tifosi. They might be rooting for a different team but ultimately they feel the same love for racing that drives us all. We look forward to an interesting weekend in Italy to mark the end of this year's European season."