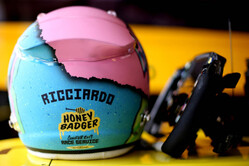 While some will point to the $55m (£44m) he is receiving for his trouble, suggesting that it will 'help ease the pain', there is one thing that motivates Daniel Ricciardo far more than money, as is the case with most of his rivals.

Winning… or at least being in a position to challenge for a win.

With a few notable exceptions, no driver gets into an F1 car happy to accept being beaten.

Consequently, despite the mega-bucks salary, many would expect the Australian to be full of regret at leaving a winning team for one that is still playing catch-up.

However, Ricciardo is having none of it, insisting that in terms of his shock move to the French team, it really is a case of... Je ne Regrette Rien.

"It was my massive intention to come here," he tells the BBC. "My intention wasn't to have a two-year layover somewhere else.

"I know people might still think that," he admits, "but I really want this to work. I feel like the hours I have put in this year have shown I have the drive to want to do so."

The French team is currently fifth in the standings, and not for the first time it is trailing a rival to which it supplies its engines, though this time around, rather than the Renault-powered Red Bull that took him to 7 wins, it is losing out to McLaren, with Toro Rosso and Racing Point breathing down its neck.

"Definitely not to be negative, but regardless of even if we were coming sixth every weekend, I knew there were still bigger targets and that we were still not going to be where we want to be," he says. "Yes, we're at times further back than we expected and hoped, but I knew there would be work to be done and a lot of hours to put in. I feel like I was prepared for that.

"Even though I feel like I have worked more hours and probably worked harder this year than in previous years, it has still been quite enjoyable because the environment is different," he insists, "new people, new relationships. If anything, it has reiterated what I want in the sport."

That said, the fan-favourite admits to some tough weekends.

"Austria, literally, I can tell you conversations going in my head during that race," he reveals. "I am literally driving around - I don't want to say not present - but my thoughts were: 'I don't want to be here.'

"When I say that, I mean: 'I don't want to be in this position'," he continues. "I was 14th or something and it was one of our worst weekends. But it wasn't a head-down defeat, it was: 'Get me back to the front - this is not where I should be. This is not where we should be.'

"So a really bad weekend emphasised my passion and love for the sport and how much I wanted to get everyone back up to the front, including myself."

Then there was Canada, which, like Monza, clearly suited the Renault, the Australian qualifying fourth and splitting the Ferraris on race day.

"Through some of these struggles, it has been really quite positive for me this year, and it's really driven me to want more from it. That's been cool," he says. "And on an actual pure positive... Canada. We've had some lows but that high was for me like a pole position. There have been some moments that have lasted."

As Christian Horner, Max Verstappen and Helmut Marko will readily tell you, in previous seasons the Renault suffered poor reliability and a lack of grunt. Now, in a year in which the French manufacturer has taken a significant step forward, it is the car that is the weak link in the package.

"It seems when I speak to the team, the base of the car, the fundamentals, the base direction, has limited us," he admits. "So we developed it a little bit but it's reached, I don't want to say its peak, but it can't really be developed that much more with this philosophy.

"So, as far as now looking at next year, it seems like they want to change the whole aerodynamic philosophy of the car. Instead of focusing on this part of the car, say the middle part, and trying to generate as much downforce in the middle, it's like, no, we need to focus on the front.

"It seems like it might be more difficult at first, but in the bigger picture we'd be getting more downforce 'points', as we call it, from that."

Other than the fact that his deal is for two years, recent comments from team boss, Cyril Abiteboul, appear to suggest that the team isn't expecting Ricciardo to remain beyond 2021 unless there is a noticeable improvement.

"I definitely haven't made any decisions yet," he insists. "I haven't had this discussion with Cyril.

"I don't want to speak for him, but he's frustrated with this year. I think part of him feels like, I don't want to say (he feels) he's let us down, but we did expect to do better.

"When we chatted last year, there were higher hopes for this year. We're confident next year is going to be a lot better, but he's thinking probably: 'If it doesn't, why would Daniel want to stay?' That's probably where his head's at and that's probably where those comments come from. It's him just being brutally honest with himself and wanting to do better and wanting the team to do better... to basically keep me and any other assets."

Already linked with Ferrari should Sebastian Vettel 'do a Rosberg', Ricciardo is aware that a number of contracts come to an end next year.

"What would I need to see?" he says. "Obviously improvements... not just from one position to the next, but solid improvements that actually we could realistically fight for a podium at some point next year. That would be very encouraging and motivating for everyone.

"I know we're still a long way off that but I still believe it's in reach. I don't think we're dreamers; we just have to clean up a few things. I still look back at Canada, if we can qualify fourth at the seventh race of the season, I still believe anything's possible with these guys."