Abiteboul admits that overhauling McLaren is the target 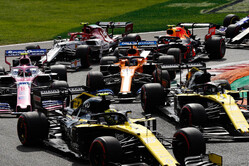 Having been overshadowed by Red Bull when it supplied the Austrian team with power units, Renault is now trailing another customer team, McLaren. However, Cyril Abiteboul is confident that in the remaining races his team can overhaul the Woking outfit.

Both teams have had more than their fair share of reliability issues, however, while McLaren strung together a run that saw it score points in eight of nine races, during which time it scored 74 of its 83 points, since the summer break it has struggled, with just one finish (outside the points) from three starts.

Meanwhile, despite a roller-coaster season thus far, last weekend, at Monza, saw the French outfit score its best result since returning to the sport in 2016.

"It's been bumpy this year," admits Abiteboul, according to the official F1 website. "There have been a number of occasions where we could have had a decent result with some points and helping for the championship, and that has not happened for many different reasons and sometimes for our own cause, sometimes external factors.

"In Italy, nothing has gone against us, against the result," he adds.

"I think it's really fair to say the job done on the engine side is very clear," he continued. "We were competitive in Montreal, in Spa, in Monza, which means the demonstration is clear.

"The weaknesses of the car are still here, that's why I'm not overjoyed because I know there still will be tough times ahead of us in the season but this is just a demonstration of the strengths, which have been clearly exposed (in Italy).

Looking ahead to the challenge, which sees Renault 18 points adrift of McLaren, with seven races remaining, he said: "Firstly, you don't renegotiate the targets simply because they are looking harder, so (Saturday in Monza) the target was still P4 and today the target remains P4.

"We are 18 points away, seven races to go, three points average more than them, it's completely doable," he insists.

"But the target is not just McLaren," he continues, "the target is to improve everywhere and against everyone, because ultimately, P5 and P4 is good, but it's not where we want to stop."

With McLaren boss, Andreas Seidl having recently called on Renault for a transparent and open relationship, its worth noting that two of the Woking team's DNFs since the summer break were engine-related, the same total as for the previous 12 races.