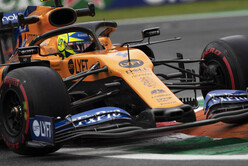 Carlos Sainz: "It was a positive Friday with some encouraging pace in the wet and also on the slicks. I'm not entirely sure where we are because we didn't run the Soft compound in FP2, so we'll see where we fit tomorrow in the standings.

"The car behaved fairly well and I'm happy with our baseline start. There is always a margin to improve so we'll work on it tonight."

Lando Norris: "A bit of a messy day. FP1 wasn't bad. The track was drying, so it wasn't like you could do proper testing. The track was just getting drier and drier. But the car felt pretty good, fairly comfortable and from the bit of wet running we did, I was pretty happy.

"Obviously FP2 was not what we'd planned. I went out for one lap at the beginning but then we had an oil leak, so we had to fix that which meant I could only go out for the last 20 minutes or so, and I used all of those laps just to get up to speed. They were the first few dry laps I did of the day so I wanted to push and feel the limit of the car, but at the same time it was trying to figure out where to brake and things like that. So, on the whole a bit messy, but some productive things."

Andrea Stella, Performance Director: "Despite the weather and the red flags, FP1 was actually quite useful. We used the Wets, the Inters and the dry tyres and learned something from each. That may be relevant for Sunday when we're expecting unsettled weather for the race.

"We ran exclusively on the dry tyres in FP2 - but the occasional light shower means the lap-times were not fully representative at times. Lando had a disrupted FP2 due to a leak which we had to investigate. We decided to use the time he had left at the end of the session for a long run: he's going to be taking a PU penalty, so the most important thing was to look at the car in race trim.

"Overall, the car seems to be a bit better behaved than it did in Belgium. We'll see tomorrow, when we should have warmer weather and hopefully good enough performance to compete for places in Q3."