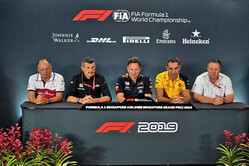 Guenther, you've just confirmed Romain Grosjean for 2020. Can you just talk us through your reasons for that decision?
Guenther Steiner: We just woke up one morning and decided to do it.

As easy as that?
GS: Easy at that.

How close was the decision - with Nico Hulkenberg, for example?
GS: So now we have to work, you see? We have to pull more out! We talked with him and, in the end, decided to go with Romain.

Just talk us through Romain's strengths... weaknesses?
GS: Weakness as well? Where should I start! No. Romain's been with us a long time and we looked at ourselves and in the moment the drivers are not our issue, it's the car. So in the end we decided to focus on the car and keep the other things stable and therefore we resigned Romain for another year. We know his weaknesses - a lot of people know that he has very big highs and very big lows as well. So, hopefully it's time to change. I'm waiting for that and maybe next year is a good year.

Guenther, how can you help him be more consistent?
GS: I try to talk always. If someone's got anything to teach me, I am here. Just make an appointment with Stuart and I'm listening very good.

Fred, on the subject of Nico Hulkenberg, is Alfa Romeo a viable option for him?
Frederic Vasseur: We are focused with Antonio. Antonio had a very tough weekend in Spa but a strong recovery the week after in Monza. We want to help him to develop and continue to improve. It will be time to discuss about the future but I am really focused on Antonio, that I think he is doing, step-by-step, a good job.

What has he got to do? What does Antonio have to do to retain his seat?
FV: Everybody is under pressure in the paddock and it's not only the drivers: we are under pressure and Formula 1 is a world of pressure - but we have to deserve it, all of us, and Antonio also.

And you feel he has the speed? Is it a consistency thing with him?
FV: The speed is there for sure, that he is matching Kimi in quali since the first one and we have absolutely nothing to complain about the speed.

And so consistency with him. Is that what you want him to work on?
FV: I just want to score more points - but as does everybody.

Zak, it's been a slightly difficult period for the team since the Summer break, during which Renault have taken a chunk of points out of you. First of all, have you taken extra precautions here to improve reliability?
Zak Brown: No. I think you've just got to keep going racing. Our pitstop obviously cost us in the last race, we understand why so we have addressed that so hopefully we won't have a repeat. No, you know, the last couple of races haven't been great but that's racing. Still seven races to go, so it's going to be a close fight to the finish.

How important is momentum for a team like McLaren?
ZB: I think momentum in the sport is important for everyone, whether it's drivers or race teams. It would be good to come away from here with a good result, given we've had two poor races. This is a tricky track; who knows what the conditions will be. I think you've just got to stick to what you know and put those races behind you and focus on this weekend.

And given McLaren finished sixth in the Constructors' Championship last year, how important is fourth for you this year?
ZB: Well, we want to improve on last year. In reality, we were seventh, because of the points situation with Force India. So, on our road to recovery, we just want to improve incrementally, so fourth would be great but I think that's about as much as we could realistically achieve. It's going to be tough holding on to it but we're up for it and we've got some very good competition from Renault and Toro Rosso's not far behind.

Cyril, same question to you first of all: how much importance does Renault place in fourth position in the Constructors' Championship?
Cyril Abiteboul: It's relatively important. It's important in the sense that we were P4 last year and everyone is expecting, and everyone around us, including ourselves were expecting to be able to equal that result, if not to improve it. Improving, we know, is going to take time. So going backwards is not great. We had fantastic momentum from ninth, sixth and fourth in the last three years. We'd like that momentum to continue but, you know, it's a sport. We've missed a number of opportunities for scoring big points - but we seized one last weekend. That's good. It's going to be an interesting fight. It's a fight that we are also honoured to have - because McLaren is a great team, they recovered a lot, they have a very good chassis so, you know, it's a decent and honourable fight.

And with the confirmation of Romain Grosjean staying at Haas next year, that's one less option for Nico Hulkenberg. How sorry would you be if him leaving Renault was to force him out of Formula 1?
CA: It would be difficult. Because, I think I've said it on a number of occasions, we feel Nico has been a pillar in the team's construction. He's obviously also a great driver. He's a huge professional outside of the track, has got huge experience and, for me, whether it's between Renault and Nico, or Formula 1 and Nico, it will be unfinished business. So, I can't do anything but really hoping he will find a way forward but it's a bit out of our hands now.

Christian. Alex Albon has had two races with the team now. How would you sum up his progress so far?
Christian Horner: I think he's done a very good job. I mean, obviously short notice when he got into the car but his drives in both Spa - particularly Spa in his first race, the recovery that he made to P5 was really impressive - he had a strong weekend in Monza as well. And so everything that he's done so far, I have to say, the whole team's been very impressed with.

And looking ahead to this weekend, Red Bull has scored 12 podiums here in Singapore, which is double that of any other team. FP1 went well for you - so how do you fancy your chances looking ahead to Sunday?
CH: Impressive statistics but unfortunately Mercedes have finished ahead of us quite a few times in the last four or five years - so I think they are very much going to be the favourites here. Lewis is always strong at this circuit. We've got a competitive car and we hope to be able to take the fight to them. We pushed them hard last year. Hopefully we can go one-better this year. Max has been in fantastic form during the summer months and had a positive first practice - but that's only one practice at the start of a long weekend.

(Luke Smith - crash.net) Christian, on drivers for 2020, when do you expect Red Bull to be taking a decision? Do you think this will be something that will come after the end of the season?
CH: We don't need to be in any rush. All the drivers that are under consideration are under contract, so we're in a unique position where we don't need to rush anything. So, we'll take the fullness of time to look and evaluate the progress of Alex and measure it against Dany and Pierre.

And as a follow-up Christian, it is just Dany and Pierre? Would you look at Nico Hulkenberg, for example?
CH: Nico isn't on our list. He's a great driver and it would be a great shame not to see him continue in Formula 1 next year. He's a professional driver that arguably hasn't achieved his potential in Formula 1 and I very much hope for him that he does find a seat because he's better than some other drivers that are on the grid and he should be in Formula 1.

(Scott Mitchell - Autosport) Fred, you mentioned with Antonio, you want to see that improvement to the end of the year. With a decision for you for 2020, will you wait until after Abu Dhabi, just to make sure Antonio gets the full season to grow.
FV: Wouldn't make sense as we are not in a rush at all. Could make sense to postpone the decision and have a look at Antonio and the improvement from Antonio but honestly I think he is on the good way.

(Julien Billotte - AutoHebdo) Question to Fred and Cyril. What's your opinion on the decision to not have Formula 2 and Formula 3 at the French Grand Prix next year?
FV: For sure it's a shame for the French Grand Prix because it's always two exciting races - but I think they did it for technical reasons. Last year they missed the German Grand Prix and it's quite difficult for the junior series to do three or four events in a row. I think they have to skip one and next year will be the French one.

CA: It's never good news for the promoter who's concerned. So, for the French Grand Prix, they've had a hard time on year one because of some accessibility aspects. They've had also a hard time year two because of the show. So, I think we need to try, as Frenchmen in the sport to come up with some kind of offer for support. Last year we also tried to create some racing from Renault, like Clio Cup. We could also be considering Formula Renault to go there. So, we have a number of things that we could do to help and make sure there is a busy weekend and value for money for people buying tickets - because we all know tickets are quite expensive. We need to make sure there is not a vicious circle, and we are all here to make sure this event is sustainable. We still believe it is a great thing to have a Formula 1 race in France, being a French carmaker. With a French driver.