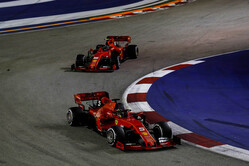 Toto Wolff believes that the intra-team battle between Sebastian Vettel and Leclerc will play into the hands of his own team... and, looking back to 2016, when Lewis Hamilton and Nico Rosberg were battling it out, he should know.

However, Ferrari's communications team might want to dress it up, Singapore was clear evidence that the Italian team has a very large elephant in the garage, in terms of the increasing rivalry between drivers Charles Leclerc and Sebastian Vettel.

Having openly queried a number of strategic calls this season, in Italy, in qualifying, the Monegasque blatantly ignored team orders to give his teammate a tow, Mattia Binotto subsequently forgiving the youngster after his emotional win.

This was followed by his public messages to the team in Singapore, after the team's strategy, coupled with a number of other factors, not least a strong undercut from Vettel, saw Leclerc lose out to his teammate.

With the intra-team set to continue, though reeling somewhat from the fact that his rivals have score three successive victories, Mercedes boss, Toto Wolff believes this will aid his own team.

"I think always two alphas competing for position has the potential for rivalry and escalation within the team," said the Austrian.

Of course, he talks from experience, the bitter rivalry between Lewis Hamilton and Nico Rosberg having spilled over on a number of occasions, not least when they took one another out in Spain in 2016.

"We've been there," he admitted, "and I think today as a team, we are very strong, with a clear philosophy. On the positives, they keep taking points away from each other, which is an advantage."

Looking to this weekend's Russian Grand Prix, a race his team has won every year since Sochi joined the calendar in 2014, he said: "Singapore was a tough weekend for us. We had opportunities to win the race, both with a stronger qualifying on Saturday and our decision-making on Sunday - but we failed to do so, for a number of different reasons. But it was also a valuable reminder of the sceptical and humble mind-set that has been so important for our success in the past seasons.

"Straight after the race, we started to analyse what went wrong and we will use those lessons to learn and improve. These difficult days are the ones that make us stronger: this team has shown time and again that it can turn weaknesses into strengths. And we will do so again, here.

"However, that shouldn't take anything away from the strength of our opposition, either. The last seven races have shown us that we are in the midst of a fierce battle - and we need to be at our best in every area to claim the top step of the podium.

"Sochi has been a strong circuit for us in recent years but those trends don't mean anything once we are on the ground. We expect the weekend ahead to be another challenging one for us - and the entire team is ready to tackle that challenge head on. The circuit features a range of corner speeds, an unusually smooth asphalt and long straights, particularly on the run down to Turn 2. We're hungry to get to Sochi and begin fighting out on track."