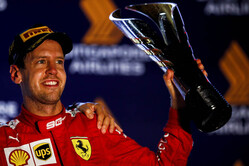 While some sections of the media have clearly relished Sebastian Vettel's misfortunes and mishaps over the last year, never missing an opportunity to twist the knife, the German admits that it is what his many fans write that has kept him going through the darkest times.

Known to have no time for social media, Vettel, revealed in the aftermath of today's Grand Prix that he had been receiving encouragement from fans around the world by more conventional means.

"I'm really proud of everyone's work back home," he told David Coulthard in the moments after the race. "Secondly, I really want to thank the fans...

"Obviously the last couple of weeks for me have been not the best," he admitted, referring to his infamous outing at Monza, "but it's been incredible to be honest to get so much support, so many letters, so many nice messages, people telling their own stories of when things might not go well and so on, so it gave me a lot of strength, belief and I tried to put it all into the track today, into the car and it's nice when it pays off."

When asked at the post-race press conference to give more details, and how he received the fans messages when he's not on social media, he smiled and replied: There's still a way, you know?

"Obviously people were able to send messages before social media," he continued, "even if that's very difficult to imagine for some people today.

"A lot of little notes, handwritten letters, which... obviously if people make the effort to write something, when you find a bit of time in the evenings to go through, it's really encouraging I have to say.

"Years ago, you know, when you start its very difficult to imagine that people follow you and these kind of things but recent years, especially here, especially in Asia, I have a lot of support, a lot of fans that come over and over again.

"As I said, I just got a lot of energy in the last couple of weeks, just from messages that I received from the racing world, from people that I know, from a long time ago but especially fans.

"After Monza, and then coming here, so, as I said, people sharing their own story of when things are up and when things go down which obviously... for us everything is centred around racing but really it's not the most important thing and, when you read through some of the notes and people's struggles in life, some very intimate and private, you know it gets to you.

"It gave me a lot of belief and confidence to just keep trying.

"Obviously nothing was wrong in the last couple of weeks," he added. "I knew that we weren't really far away from a breakthrough moment, sort of, but surely, you know Charles has been very strong and was right to win the last two races - but I knew on our side that we just need to keep doing our job and sooner or later things will fall in to place. So obviously I'm happy that it was rather sooner than later."

Talking of Charles... one wonders if he'll be penning a note of encouragement to Seb any time soon.