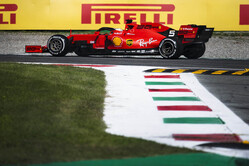 As if spinning away the chance of a podium in his team's home race wasn't enough, Sebastian Vettel was subsequently handed a 10 second stop-and-go penalty for leaving the track and rejoining in an unsafe manner.

Indeed, having spun his Ferrari at the Ascari chicane, in his efforts to get going again he collided with Lance Stroll in what the stewards deemed a "dangerous incident".

Along with the stop-and-go penalty however, Vettel was handed 3 penalty points, and these, combined with the two he picked up in Canada during his scrap with Lewis Hamilton, not to mention the two for hitting Max Verstappen at Silverstone and the two earned during practice in Austin last year for not slowing sufficiently when the session was red-flagged, bring him up to nine for the current 12-month period.

And with 12 points triggering an automatic race ban, the German has to stay out of trouble until October 19, exactly a year after he picked up the penalty points at COTA.

Speaking at race end, when asked about the spin, Vettel said: "Obviously Im not happy with it, I can't be happy with my day today. I thought we had a good start and then nowhere to go. I lost a position, got it back, reconnected to the cars ahead and then lost the rear and couldn't catch it. Simple as that. Obviously not happy and after that the race was obviously gone."

Asked if he had seen Stroll, who was given a stop-and-go and 2 penalty points for the manner in which he rejoined the race, he said: "No. I struggled a couple of times to get the car going, so I struggled to get in the right direction as well. I couldn't see him."

Clearly dejected, when asked if he had lost any love for F1, he said: "No, not really I haven't. Of course I still love what I do but surely when we're not doing well what you know you can do well you can't be happy."