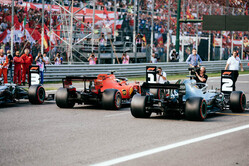 As the clock ticked down to under two minutes, to all but (seemingly) those actually involved, it was inevitable that those drivers hoping to get in their final/only qualifying hot lap, they were rapidly running out of time.

And so, with the air of Messrs Hulkenberg, Stroll and Sainz it proved to be, and not for the first time F1 made it beyond the sports pages for all the wrong reasons.

Following, what Toto Wolff described as the "absurdity" of the session, Lewis Hamilton also hit out at the tactics.

"It is definitely a bit of an anti-climax that we couldn't all go out and do that last final lap," said the Briton, "that's one of the most exciting ones we have.

"It's crazy with this timing that we have, the system we have, where everyone backs up, everyone is trying to get a position and they times us out," he added, even though he and his team were among the culprits.

"They basically timed us out. It's interesting... get pole position in the first run and then just time everyone out.

"On the out lap it's dangerous for us all," he continued. "There are people slowing down, you don't know who is alongside you and that. It's definitely risky business out there but it's kind of enjoyable at the same time.

"It's the same as has happened for some races now. The drag is a big issue here, the tow is a key to getting a good lap. Everyone was slowing right down and also blocking the way, so you couldn't really get through.

"It was pretty dangerous. I nearly crashed a couple of times trying to stay out of the way of the guys that were braking ahead of me and then people trying to come past me."

Asked about the information coming from the pit-wall, he said: "Well, naturally, you're listening to your delta, understanding whether you've still got time left but I tried to get through... I was supposed to be behind Valtteri but I overtook him, knowing that I needed to get further ahead, but I couldn't overtake everyone, they were weaving and braking and it was like trying to avoid carnage all the time. So, we had a couple of people I think were holding everyone up, trying to, I guess, let people by but yeah, a bit of an anti-climax, I think, probably for all of you.

"Maybe they should have extended the session or something like that, so we could finish, or something - I'm not really sure how we're going to get around this. Everyone's brake testing and slowing down to let others past, just to get a tow. I'm not sure how we're going to get around that in the future. But... yeah... in hindsight I wish I just went out earlier. Just got out there and got a clean lap. That would have been great."

Asked how it will have looked to fans, the Briton said: "I don't think it looks good but I'm not a fan so I'll let the fans decide on that.

"I think fans get excited, at least I remember I used to get really excited about watching qualifying and all the way down to that last minute, so it's down for you guys to have an opinion. For me, just as a driver, I would have loved to have obviously driven more qualifying. It's one of the best stages of the weekend. I think some drivers didn't even have a lap - is it true that Seb didn't even have a lap? Is that right? Yep, it is the way it is."

Asked if drivers should be penalised for such tactics, he said: "Honestly I don't know. It's not our... it's the system probably needs to shift a little bit maybe.

"I don't think they should start handing out penalties. We just need to look upon it and reflect a little bit and see what we can do to make it better, make it better for the fans and make it less dangerous. Like they already made a change today that we have to finish the out lap within a certain delta time but even that's still too slow. There's improvements we can make, for sure, for safety but also for the spectators to watch."