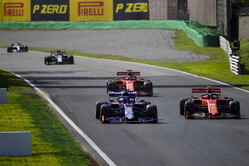 Having set the pace in final practice, many wondered whether Sebastian Vettel might spoil the party and deny Charles Leclerc pole at Ferrari's home Grand Prix.

However, the Italian team's tactics, not to mention the farce that was the final moments of the session, meant that the German could only manage fourth, and will therefore start from the second row.

Posting his first timed lap without the benefit of a tow, Vettel was looking to receive a tow on his second run from his teammate, who, ironically, had posted what proved to be the pole-winning time courtesy of a tow from the German on his first run.

However, the madness that was the final run, which eventually saw Nico Hulkenberg, Lance Stroll and Carlos Sainz receiving reprimands for "playing a significant role in the backing up of cars at a critical stage of the final out lap", meant that Vettel failed to improve.

"I thought we had spoken about it," the German told reporters. "I definitely listened to what we intended to do.

"I think it was clear what would happen in the last bit of qualifying," he continued, "I think we were foreseeing exactly what happened, but we weren't doing what we were supposed to do and that's why it was a mess. And I didn't get a run in the end.

"I'm not happy with that," he added, "but obviously a good team result, which in this country, in Italy, is important. But as I said, I'm not entirely happy because I thought it was clear what we communicated beforehand, between us, internal, so our team."

Asked if he blamed his teammate, he was adamant: "Not from my side. I was the one trying to indicate, 'get out of the way' because it was clear that I should be the one second in the second run getting a tow, because I was the first one in the first run.

"People were slowing down, Charles was slowing down and in the end I didn't get across the line, nor did I have a good tow. So not a good outcome."

"The plan was that, in the first run, Seb was giving me the tow and in the second run, I will give him the tow," explained Leclerc. "So, I actually went out of the box in front of him, and then there was the huge mess after Turns 1 and 2 and the McLaren and a Renault - I don't know whoever that was - they stopped in the middle of the track and we had nowhere to go.

"Seb overtakes me there, because of the mess, because obviously we were aware it was quite tight on time, and then I stayed, basically, behind Seb, until the last straight where I've heard also on the radio "you can overtake Seb," so I overtook him - but I had no time for me either to start the lap, so yeah, it was a shame - but I don't think I could have done much more."

The German, was subsequently given the "benefit of the doubt", following an investigation into whether he exceeded the track limits in the Parabolica in Q2.