Hulkenberg, Stroll and Sainz given reprimands 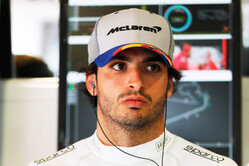 As the Monza stewards continue to investigate the farce that was the final phase of today's qualifying session, Nico Hulkenberg, Lance Stroll and Carlos Sainz have all been given reprimands for "driving unnecessarily slowly".

As part of their investigation, the stewards reviewed video evidence, the GPS data and radio communications of all three drivers in addition to hearing from the drivers and their respective team representatives.

In each case the driver conceded that he drove "unnecessarily slowly" because he wanted to "get a tow" for his qualifying lap, while pointing out that in their opinion other drivers also drove slowly.

Nonetheless, the stewards felt that all three drivers played a significant role in the backing up of cars at a critical stage of the final out lap for Q3, and thereby gave each of them a reprimand, in each case their first of the season.

At the same time, the stewards have "strongly" recommended that the FIA expedites a solution to this type of situation, a view echoed by millions of race fans around the world who rightly feel short-changed by today's shambles.