Drivers to be heavily punished for indiscretions at Parabolica 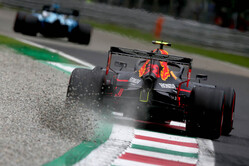 As the FIA continues to crack down on drivers exceeding track limits, race director, Michael Masi has taken a dramatic step at Monza.

Drivers will often run wide as they exit the famous Parabolica in order to carry as much speed as possible on to the pit straight that follows, the tactic having become almost common place since the previous gravel run-off was replaced by asphalt, thereby almost encouraging drivers to take advantage.

However, in a bid to prevent drivers taking advantage, on Friday night Masi issued a new directive.

"A lap time achieved during any practice session or the race by leaving the track (all four wheels over the white track edge line) on the outside of Turn 11 will result in that lap time and the immediately following lap time being invalidated by the stewards," he informed the teams. "Teams will be informed of any such breach on the official messaging system."

While it is usual for drivers to have their lap time invalidated following such an indiscretion, it is the first time that drivers have faced the threat of having two laps deleted – the move clearly in light of the fact that the advantage gained by exceeding the limits will impact the subsequent lap.

Previously, the rules on track limits were enforced only during qualifying and the race, but last weekend in Belgium Masi deemed that the practice was to be 'outlawed' in all sessions in a bid to "make it consistent for the whole weekend".