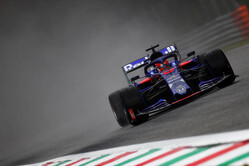 As expected it is wet, and while tomorrow should be dry, we are expecting the rain to continue today and return on Sunday.

While it has eased off, and isn't predicted to return until this afternoon, as we know from experience it tends to remain damp once it has rained here, especially when the sun isn't there to dry things out. The situation is exacerbated, of course, by the large oak trees that line much of the track and continue to drip rain drops onto the circuit.

The damp will not please Ferrari, which is expecting to make full use of its power advantage here this weekend, but will please the opposition, especially Red Bull.

That said, Max Verstappen will start from the back of the grid on Sunday, as he, and Pierre Gasly, will be running the latest-spec Honda.

The lights go green and Grosjean heads out to get things underway. The Frenchman is on full wets.

As he is joined by teammate Magnussen, Grosjean questions whether his tyres were heated properly. "It's very, very slippery," he reports.

More drivers head out, all on wets, including the Ferrari pair. Vettel carries too must speed into the first chicane and is forced to miss the corner. Shortly after, Norris makes a similar mistake.

Verstappen is one of the last to head out, the Red Bull sporting Inters.

Eight minutes in, and Albon, Sainz and the Silver Arrows have yet to appear.

Despite the conditions, Verstappen's Red Bull fills the air with sparks as it scrapes the track surface.

While most cars, as ever, sport unique Monza rear wings, the Williams pair are sporting the sort of wing one would expect at Monaco not Monza. However, the Grove outfit says it is merely testing the device and will not be running it all weekend - no doubt with an eye on Singapore.

Switching to the Inters, Norris posts the first time of the weekend, a 1:38.569.

"We're happy for you to do continuous laps if you want to," Norris is told.

Seventeen minutes in and Hamilton heads out on full wets.

Norris improves to 36.544, still the only driver to post a time.

Kubica, Ricciardo, Gasly and Hulkenberg head out for a second run, all on Inters.

A 35.814 sees Kvyat go quickest, Toro Rosso having scored a historic victory here in the wet back in 2008.

Oh dear, an early, and rare mistake from Raikkonen who is off and stuck in the gravel in the Parabolica. Replay shows that the Finn, on Inters, lost the rear end as soon as he applied the throttle.

The session is red-flagged as his car is extricated from the kitty litter.

Moments before, Sainz had spun in Ascari.

The session resumes, and Sainz leads the way, with the Ferrari pair also keen to get back to work.

After 35 minutes, only 8 drivers have posted times.

As he makes a mistake at the first chicane, Verstappen is helpfully advised that his tyres are cold.

"It's because these tyres are so, so hard," complains the Dutch driver, "it's why everybody keeps going off, it's insane!"

Meanwhile, Perez is off and in the barriers at Ascari, causing the session to be red-flagged again. Again, the replay shows him losing the rear and clouting the barriers with the rear and then the front of the car.

Again the session resumes and Ricciardo is among the first out, the Australian on Inters.

No sooner has Ricciardo improved to second than teammate Hulkenberg posts 35.506 to go top.

Albon is the latest to carry too much speed into T1, as teammate Verstappen goes quickest with a 35.397.

Ricciardo goes top with a 34.528, as Verstappen and Norris look set to improve.

Gasly is beached on the kerb at the first chicane, causing the session to be red-flagged again. He gets the car going again, but as his manoeuvring continues he eventually needs the intervention of the marshals to get back on track.

Once again, the session resumes.

The Ferrari and Mercedes duos, have yet to post times, though at least the red cars are on track, the Silver Arrows having only completed one lap apiece.

A 33.721 sees Kvyat retake his position at the top of the timesheets.

Vettel improves to fourth with a 33.543, as Giovinazzi spins at the first chicane.

Albon goes top with a 32.536 as the times continue to tumble. Within moments he is leapfrogged by Sainz and then Leclerc (32.007).

With 25 minutes remaining, some parts of the track are seeing a dry line begin to emerge.

Hamilton heads out again, as Vettel has a wobble in the second chicane.

As Leclerc improves to 31.290, the cameras pick up on Fernando Alonso in the McLaren garage.

Hamilton, on his first flying lap, goes second, 0.554s down on Leclerc.

As Bottas heads out, Vettel misses the first chicane once again.

The Finn posts 32.919 to go seventh, but having passed his teammate on the approach to the Parabolica, is now in a position to give Hamilton a tow. The Briton sweeps past the Finn on the main straight, only to overdo it in the first chicane.

Business as usual, as they say.

Bottas leapfrogs his teammate with a 30.956 as Gasly weaves his merry way through the polystyrene barriers at the first chicane.

Following a brief lull, with ten minutes remaining, the Ferrari pair are the first to make the switch to slicks, both head out on mediums. Kvyat follows them, on softs, as do Norris and Sainz.

While both Ferrari drivers fail to improve, Sainz overcooks it at the first chicane.

No such issues for Kvyat who goes quickest in S3 on his out lap.

As Vettel gets it wrong at the second chicane, the Mercedes pair head out on softs.

Norris improves to third with a 30.846, as Hamilton follows Vettel, the Briton clearly looking for a two.