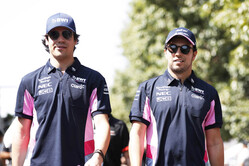 Lance: "I've always enjoyed racing at Monza – right back to my F3 days – and it's one of those races where the atmosphere is really powerful. As a fan of the sport, I know how important Monza is to Formula 1 and I hope it always has a place on the calendar. I've had good days there, too, including the wet qualifying of 2017, which is probably my strongest memory.

"I'd like to think we can show some good pace like we did last weekend. We took some important steps forward in Spa and the balance of the car feels better compared to the races before the summer break. We're still in the learning phase of these updates so there's more potential for sure.

"Monza is a proper old-school track. It's just so quick and there are some big braking zones that put huge energy through the car. Because the car is running with really low downforce, there's much less load and the car moves around a bit more, especially in the braking zones. That's why you have to work so hard in practice to find a balance. Confidence is everything."

Sergio: "It felt good to be back in the points at Spa. The car was competitive from the start of the weekend and I think we got the result we deserved after some disappointing races. We know we have the potential to be much stronger in the second half of the season and Spa shows what we can achieve when everything comes together.

"Monza should be another strong weekend for us. Hopefully, we can continue with the speed we showed in Spa. It's another very quick track and the car works well in low downforce spec. To be quick, you have to be brave on the brakes and attack the kerbs. In qualifying, on low fuel, it's a big challenge and you have to be so precise.

"There are some really nice parts to the lap – the Lesmo corners, for example, are really challenging. The Parabolica, too, is another corner where you have to use every inch of the track. Controlling traction is also important at Monza because if you get wheelspin out of the corners it quickly destroys your tyres.

"Monza is a special place to go racing and always a highlight of the year. It's so quick, quite narrow in places and historic. The Tifosi have so much passion and it reminds me of the atmosphere we have in Mexico."

Otmar Szafnauer: "Few tracks test a car to the limit as much as Monza does. The focus is on top speed, but it's also a big test for the brakes. I think we can be competitive again and we arrive in Monza determined to build on the momentum of our Spa result.

"We've made some significant progress over the last couple of months and the new direction we have taken with the updates since Germany is paying off. We will bring further elements of our new aero philosophy in Singapore before we shift all our resources to the 2020 car.

"As ever, the middle of the grid remains incredibly tight. With the points being spread pretty evenly across a number of teams it's not easy to make up a deficit, but we won't give up. We're only 11 points away from fifth place, for example, so there's everything to play for with eight races to go."