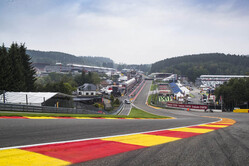 As it continues to crack down on drivers who exceed the track limits, in Belgium last weekend the FIA installed an electronic detection loop at Raidillon, in a bid to prevent drivers cutting the kerb, thereby straight-lining the corner and carrying more speed up the Kemmel Straight.

Drivers were clearly warned that "a lap time achieved during any practice session or the race by leaving the track and cutting behind the apex of Turn 4, as judged by the detection loop in this location", would be invalidated by the stewards. Furthermore, "on the third occasion of a driver cutting behind the apex of Turn 4 during the race, he would be shown a black and white flag", and any further cutting would be reported to the stewards.

As it happened, there were no such transgressions, nonetheless, F1 race director, Michael Masi says the FIA is considering using the loop at other events.

"Changing cars is probably the large part of it," he admitted. "An element of it is also looking at what happens in Friday practice. So if there has been a change it has been delivered at the drivers' meeting and then published as a result of that.

"I would not like to say there is a one solution fits all in terms of how it will work, but it is just looking at each different circuit and circumstance on the basis of what it is."