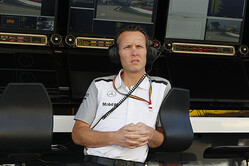 Other than increasing the revenue stream, by means of more pay-per-view deals, more races, betting, sponsors and streaming, F1 is seeking to improve the show by levelling the playing field. This will be done by introducing a budget cap, which essentially means an end to the current spending war, while also dividing the prize money more equally and scrapping the various bonuses.

At the same time, Ross Brawn and his ever-expanding team are working on technical regulations that will make the cars look more aggressive and less reliant on aero, thereby allowing closer racing.

However, former Williams technical director and McLaren race director, Sam Michael, believes that the proposed regulations do not go far enough and that in time, as far as the 'playing field' is concerned, it will be business as usual.

"What they're trying to do, I think it's a good thing to do," Michael told Speedcafe. "The move back to ground effect tunnels effectively reduces the amount of propulsion downforces created around external facing things like prop wings, etc.

"So I think the objective is good," he admitted, "I'm guessing through their studies that they'll be able to prove that they have improved the following conditions of the car behind. If they achieve that, it would be a great outcome. You would then in turn hope that that improves the racing, the ability to overtake or even just follow closely.

Under the current regulations cars lose as much as 50% of their downforce when closely following another car, under the new regulations it is intended to reduce this to 10%.

"If they correctly met their objectives of enabling that following car then I think it will make a really good improvement, but I don't think it'll solve it," he said. "At the end of the day if those rules are really successful and they beat the engineers in Formula 1, you wouldn't have engineers in Formula 1.

"F1's got this diametrically opposed objective where you've got a technical driven sport," he continued. "The more successful the engineers are, the more boring Formula 1 becomes. It can't be any other way because that's their job. If they went to every race and they weren't sure of the outcome and their models weren't good enough, they'd get sacked.

"So you're only left with variables that occasionally we'll get something slip through like reliability problem, or weather, or drivers; drivers making a mistake or running into you or something like that. Those sort of external factors are pretty much the only variables they struggle to control.

"And by the way," he adds, "those they even try to model; all the F1 teams have proper sort of Monte Carlo simulation where they calculate the probabilities of different events happening, so they're even trying to model the things they can't control.

"Unfortunately that means what you've got to do, I think in Formula 1, is you've got to create scenarios that are equal for everybody but improve the competition so it makes it possible for more people to win. That's the thing that I think they'll struggle with to get that right.

"There's two things that you'll really struggle to get across the line in Formula 1," he suggests, "one is that grid order, because it's very traditional, it's been like that since the start of Formula 1, and the other thing is the race distance.

"I would definitely consider doing that," he says of reversing the grid order. "I would also consider sprint races, potentially dividing them into two, doing what they've done here in Supercars where they've effectively got a Saturday and a Sunday race, which I personally think is more entertaining.

"But again it throws away the traditional grand prix if you like and makes a disconnect right back to the '50s.

"If you're going to keep trying to get young people involved in the sport and keep them entertained, they don't have the attention span to sit through a 300-kilometre grand prix, they just won't do it," he said. "If they do watch it, they'll watch the start, you'll only keep them engaged if you have a situation like the German Grand Prix where it's immediately apparent that this is going to be an unusual grand prix.

"So it's going to be one in 20 (races), the rest of the time they're just going to turn it off. So the chance of actually get them to turn on the beginning is very low. If motorsports in general, and F1 as the pinnacle, want to keep attracting a young crowd, they've got to do things to keep the attention span.

"The challenge is there for all sports," he admits. So let's say (we introduce) reverse grids, and I'd be flexible about it. One of the things that F1 is very good at internally is change. The whole business model of Formula 1 is change management. It doesn't matter if you're last on the grid or first on the grid, if you're not changing and improving you're going to die.

"What's really remarkable about Formula 1, although internally it's pro-change, by that I mean I get the next new dashboard, get the new front suspension, flat out, turn that around, F1 is fantastic at that. What it is very bad at is actually applying that philosophy to the sport itself, and it's also really contradictory.

"I know why, it's because the teams at the front don't want to lose competitive advantage, but if they applied that model to the sport then you would turn the whole thing on its head.

"I think if you can bring that actual internal mentality of the F1 teams to the sport, as a whole you'll transform it within 12 months," he concludes. "I actually think that if they don't do that, they have a real long term risk to the entertainment of the sport."