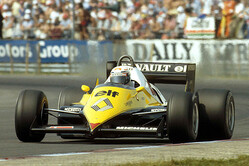 For as long as anyone can remember, fans have called for more reliance on mechanical grip and less reliance on aero. Indeed, while the sport has sought to simplify the devices, the constant developments and ever more stylised architecture has helped drive up spending while failing to improve the show.

Little wonder then that some fans would happily see wings scrapped altogether.

However, responding to the official F1 fan portal, F1 chief technical officer, Pat Symonds insists that wings are vital, and that the rear wing, in particular, is intrinsic to the 2021 regulations.

Ruling out a move back to 'wing-less' cars, the Briton admits that even a return to the basic wings of the 70s and 80s isn't possible.

"I don't think that eliminating front and rear wings is actually the right thing to do," he said, "there are lots of other aspects to it.

"We want cars that do work in turbulent air, even if we're trying to reduce that very turbulence," he added.

"I wish it was that simple," he said of a return to less prominent wings. "If you remember, probably in the early parts of my career, the cars were running with a lot of the downforce generated underneath the car, sometimes without the front wings and sometimes with the front wings that were used for trim, and actually not much of a rear wing.

"A lot of people think 'OK, they were great cars, they could follow each other'," he continued, "but that's not necessarily true.

"In fact we're doing a lot of research into that at the moment with the view to producing a 2021 car that (will allow drivers to) race together and one of the secrets that we've found - and we've known for a little while, we've proven it now - is that you need a rear wing to pick up the wake, all the dirty air that's behind the car, and lift it up over the following car, so it's actually quite important to have a rear wing on there.

"Once you have a rear wing there you have a lot of load all the way out on the back of the car so you have to balance it with something on the front," he adds.

Referring to the recent video issued by the FIA, which showed a model of the proposed look for the 2021 car in the windtunnel, complete with wings, and which suggests a serious reduction in the wake, Symonds says: "I have a lot of clever guys working on that and we've been working on that for a while and we continue to.

"It's not something that can be done in the short term," he admits. "We started a while ago and we really hope that in 2021 we can provide a significant difference without the cars looking completely different to the way they do today."