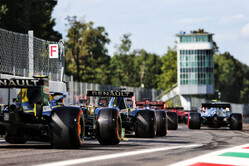 The Monza stewards have deemed that no further action is required after investigating Nico Hulkenberg for leaving the track without a justifiable reason.

The German was summoned by the stewards shortly after today's shambolic qualifying session as they investigated why he appeared to miss the first chicane for no discernible reason.

The stewards reviewed video evidence, GPS data and radio communications and heard from Hulkenberg, together with a Renault representative.

The German told the stewards that he was focussing his attention on the cars that were behind him in Q3 and that he left it too late to turn the corner so he went straight ahead into the chicane.

The stewards noted that he entered the corner at the same speed as he did on his previous fast lap and was in 3rd gear instead of 2nd gear which he used on his
previous out lap.

Deciding to take no further action, the stewards note that the regulation refers to “deliberately” leaving the track and in this case they were unable to determine that the driver deliberately left the track.

The stewards are still investigating Hulkenberg, as well as Lance Stroll and Carlos Sainz for driving unnecessarily slowly in Q3, while Sebastian Vettel is under investigation for leaving the track and gaining a lasting advantage.