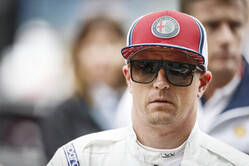 Kimi Raikkonen will take a 5-place grid penalty after Alfa Romeo was forced to change his gearbox following his Q3 crash.

The Finn went off into the barriers in the Parabolica, causing a red flag that was to compromise several drivers first flying laps.

Though the Finn, who failed to post a time in the final phase of the session, had thereby qualified tenth, such was the damage to the rear of his car that Alfa was forced to change his gearbox.

However, his 5-place grid penalty benefits teammate, Antonio Giovinazzi who will now start from tenth having qualified eleventh.

"I paid the price for my mistake which is a bit of a shame as the car was behaving pretty well," said the Finn. "There is a lot of damage so we have to see where I'll start, but maybe the weather will help and in mixed conditions we can still get a good result. I'll definitely try my best to make up ground in the race."

Meanwhile, following his engine issue, Sergio Perez will use the older-spec Mercedes power unit, albeit a brand new one.

Switching to the spec-3 unit would been automatic demotion to the back of the grid to join Verstappen, Stroll and Gasly, as this would be classified as a change of specification, whereas using the spec-2 unit will merely warrant a grid demotion.

"I think what we are going to do is fit a spec-2, a new one," said team boss, Otmar Szafnauer, "and start maybe 19th... I think we will start ahead of Verstappen as he has taken a new powertrain and we out-qualified him. So we will start 19th and see how we go.

"If we ever go to the spec-3 then it is a trade-off between more performance and penalties," he added. "But, heaven forbid, say one time we spin off in Q1 or something fails in Q1 and you are last anyway, then you can introduce the Phase 3."

Asked if reliability concerns over the latest-spec Mercedes were also behind the decision to stick with the spec-2 - Perez and Robert Kubica both having suffered failures with the new unit in Belgium, Szafnauer said: "I don't know enough, need to ask Mercedes.

"However, they are really, really good at reliability in general and they will get on top of it. They are really strong on that."