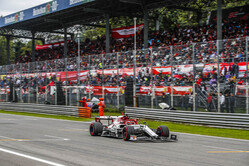 Well, that was bizarre. Qualifying turned convention on its head, delivering a session that produced thrills, spills and its fair share of gasp-out-loud moments. Under the Monza sun - a stark difference from the drizzly, grey skies we experienced so far this week - qualifying unfolded in an unpredictable manner that left some asking "what if", others questioning "what happened" and most on the grid wondering "what now", at least as Sunday's race is concerned.

There was heartbreak for local favourite Antonio, who missed out on a place in the top ten for the agonisingly small margin of 0.002s. The hundreds of members of his fan club, sporting blue t-shirts on the main grandstand, nearly experienced a great result from the man from Martina Franca, but in the end he was to finish in P11. Antonio, however, remains confident he can do a good race tomorrow and climb up a few spots to bring home some points on home soil.

Kimi wasn't too fazed about the small gap - we believe the words "I don't care even if it is one thousandth of a second!" were uttered on the radio once the margin placing him in Q3 was announced. His involvement in the final segment of qualifying, sadly, was cut short by a visit to the barriers on his first timed lap, a situation that caused a red flag and, indirectly, the messy final few minutes of qualifying we witnessed.

What happened as the remaining nine cars took to the track is easy to see but hard to fully understand. It will set Twitter alight as fans dissect each driver's move; it will affect tomorrow's race; and, perhaps, it was the most fitting way to end a rather bizarre day.

Frederic Vasseur, Team Principal: "Mixed feelings after today's qualifying session. The pace was there, the car was good and both drivers did a good job, but still it feels we could have achieved more. Antonio missed out on Q3 by a minimal margin and then Kimi crashed whilst he was on a strong lap. We will need to assess the damage on his car and then we'll know whether this has consequences for tomorrow's grid position."

Kimi Raikkonen: "I paid the price for my mistake which is a bit of a shame as the car was behaving pretty well. There is a lot of damage so we have to see where I'll start tomorrow, but maybe the weather will help and in mixed conditions we can still get a good result. I'll definitely try my best to make up ground in the race."

Antonio Giovinazzi: "It was a bit frustrating to miss out on Q3 for just two thousandths. I lost a little bit of time in the second chicane because one car went out and put gravel on the track, but this is the price you pay when the field is so tight. We wanted more but we still have a decent opportunity to have a good race. We have to take the positives, we get to choose our starting tyres and I think it can be an advantage - assuming it doesn't rain. We are just outside the top ten - if we have a good start and a good strategy we can be right in the fight for points."