Ericsson on standby at Alfa 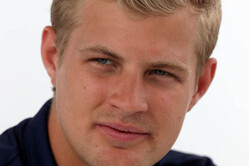 Long before Mercedes kick-started the second half of the season with its 'announce', there was a buzz on social media first thing this morning with claims that Alfa Romeo was to replace Antonio Giovinazzi.

However, while the Swede is at Spa-Francorchamps, and will miss this weekend's IndyCar race at Portland, he has been called up by the Italian (Swiss?) team as a possible replacement for Kimi Raikkonen who incurred a leg muscle injury during the summer break.

"I pulled a muscle and we will see how it is," the Finn told reporters. "We need to have some back-up plan. In my head it should be fine but you never know.

"It would be stupid not to have our third driver in case I couldn’t be driving," he added, "then it is the worst case scenario. There is a reason why every team has a third driver. It is a normal story. It is a difficult situation for him also because he had a race, but that is how it is."

Asked how the injury came about, the Finn was as laconic as ever.

"Sport," he replied, having also suggested old age. "It is dangerous. I always said it is more dangerous... drinking is probably safer. Usually you don't get injured, you just get a hangover."