A new engine for Giovinazzi 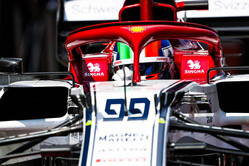 While Ferrari will not be running its latest spec engine until next weekend at Monza, it is down to customer teams Haas and Alfa Romeo to act as guinea pigs this weekend.

Following his engine failure in Q2 yesterday, Alfa Romeo opted to fit a new engine in Antonio Giovinazzi's car, and with the new internal combustion engine, turbocharger, MGU-H and control electronics exceeding his permitted allowance, the Italian will start from the back of the grid.

All four manufacturers have introduced new-spec engines this weekend with mixed results.

Other than the resultant grid penalties - though the Mercedes-powered runners were largely unaffected - there have been technical issues.

Mercedes-powered Sergio Perez and Robert Kubica have both suffered dramatic failures, while the Renault pair, having been handed their penalties, promptly returned to the previous-sec unit, placing the new engine in their respective reserve pools.

Asked, in light of the two engine failures, if he had reliability concerns, Lewis Hamilton told reporters: "I don't know the details of why the engines have gone, so I have nothing to worry about currently because I don't know anything about it really.

"I'm sure, when I get back, I'm sure they're trying to analyse it and they'll give us a bit of an idea - but still, I've just got to keep my head down and do what I do and what will be will be. There's not much I can do about it, so there's no point worrying about it."

As a result of his new unit, Giovinazzi will start from the back row in 19th, ahead of Kubica who didn't qualify.