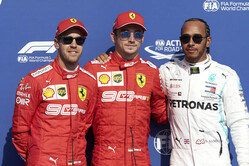 Q: Well done for today. You seemed to be totally in control of the weekend so far and you got a really good lap in. How did it feel like in qualifying for you?
Charles Leclerc: It felt good. Obviously the first sector was not exactly what I wanted, especially in the first corner, we had to go very slow to prepare the lap because there was a lot of traffic. I struggled for that a bit, but after that from the second corner onwards then we were very strong and it felt amazing.

Q: It seemed like you were the only guy who stayed out of trouble on the out laps, because everyone struggled to find a clean spot, but you managed it really well, or not?
CL: Yeah, that's what I asked actually when I was in the garage - to not really care about the slipstream, it was just too much of a mess to prepare the tyres and the lap overall, so I wanted to be alone and yeah, it worked out, so I'm happy.

Q: Good feeling for tomorrow for the race?
CL: Yeah, we were struggling a little bit more during the race pace yesterday, so we need to work on that. But, yeah, looking at the pace today I'm pretty sure we will be strong.

Q: Seb, well done today, P2. I think when I saw you in the middle of the same like Charles, you struggled on the out lap to get the tyres into the right window. Was that the key problem today?
Sebastian Vettel: Yeah, I mean in the end it's good that we secured the first row. To fight for pole, I was sort of in the queue; it doesn't help, but no excuses. We look forward to the race tomorrow. I think we have good pace in the car, so hopefully we can show it also over, what is it 44 laps?

Q: But you didn't seem that happen on the long run pace yesterday. You think tomorrow it's going to be OK when it's a lot cooler?
SV: Yeah, I think it should be better. The car was better today, so we'll see. Obviously temperatures should drop overnight, which makes a difference, but it's the same for everyone.

Q: Thanks. Lewis, first of all I think we need to talk about your mechanics. They did an awesome job.
Lewis Hamilton: Absolutely. P3 was a terrible session for me. Of course, it's painful because you know how many people work so hard to build those parts and then you know how hard the guys work to put the car together and I knew that was going to be a tough challenge. But my guys are just faultless, they always work and give 110% and I'm so grateful for that. After that I was really just trying to pay them back with a good qualifying session. Considering I missed P3 and a lot of P1 actually I'm really grateful I'm up here.

Q: You were nearly crashing, I think even Valtteri on the out lap, because it was a mess as well. Was it for you hard to get the tyres in as well, because everyone seemed to be affected by that?
LH: Yeah, that was a bit slow. Obviously he was trying to keep the tow of the car in front, so I was trying to hold behind him and everyone was behind me, so it's really tricky. But nonetheless Ferrari have done a great job today, Charles did an exceptional job and I hope we can bring the fight to them in the race tomorrow.

Q: I think your long-run pace was very good yesterday and there is a chance for you on the long straight to attack the Ferraris straight away. Are you happy that it's going to be 10 degrees cooler tomorrow? Is that helping you out?
LH: I don't know, I'd have to ask my engineers. Either way I'm going to give it everything and hopefully give these guys a good race.

Q: Charles, many congratulations, you dominated all three segments of qualifying. Can you tell us how it feels to be on pole by seven tenths of a second?
CL: It obviously feels amazing. It was very tricky, especially in Q3 I struggled quite a lot, the start of the lap was always very, very messy, because there was quite a lot of traffic with all the cars around but in the end I managed to do the full lap correctly and I'm very happy. I definitely did not expect to be that much ahead, but very happy with my lap anyway.

Q: Well, came close to winning in Bahrain earlier this year, so given your level of dominance so far this weekend how confident are you for tomorrow?
CL: I don't know. I think we have been quick since FP1 but once we did the race simulations in FP2 we weren't as quick, so I think it's not going to be easy tomorrow. We will try to give everything. The gap is quite big today but it doesn't mean it will be like that tomorrow, so we will working hard to improve on the race run we did yesterday and we will see.

Q: Well done again. Sebastian, you said on your cool-down lap "what a mess". Can you just describe the session and particularly Q3 from your point of view?
SV: Uhh, messy! I think I was getting into a sort of a rhythm, maybe it took a little bit longer for me today to really get a hold of the car but it felt quite good. But then in Q3 it was quite messy, with everybody trying to get a tow and a lot of queuing for the last corner, which made it very tricky and, yeah, obviously the tyres then are not where they were probably supposed to be and being further back it I think it wasn't ideal. Anyways, Charles did a better job today, also with that, so now looking forward to tomorrow. I felt the car was quite good, which is the most important thing so let's see tomorrow with the change in ambient conditions, in track conditions, what the race is going to be like.

Q: Thank you and good luck tomorrow. Lewis, it's been an impressive comeback by you and the team after your crash in final practice. First of all, any lasting physical effects from that crash and how was the car in qualifying?
LH: Firstly, it's been an interesting weekend so far. We struggled obviously a little bit in the first session with some problems and then, yeah, I made a big mistake this morning with the change we made and it just didn't feel great out there and obviously I had that incident. But the guys did an incredible job, incredibly diligent, to perfection - taking the car apart and rebuilding it. There's so much pressure on those guys through the weekend and naturally I don't ever want to put them in that position, but I think they relished the challenge and so really proud of them. So going into this session I was just hoping that I've got the car in the right place and ultimately hoping I can pay them back with a good qualifying session and I think today was really smooth and I think the team did an amazing job in terms of where they put us out there. It was a little bit tricky when everyone was slowing down but nonetheless, congratulations to Charles, he's been so quick all weekend. But I think in the long run we can at least give them a bit of a challenge tomorrow. I think a bit of the straight speed, which is where generally all the speed is, it's usually not there so much in the race, so hopefully we'll be there or thereabout with them tomorrow and can put in maybe some interesting strategies, we'll see.

Q: (Christian Menath - motorsport-magazin.com) Question for you Seb. You said you didn't get into the rhythm very fast; it took a bit of time for you. Do you have an explanation for that - because yesterday it looked like you lost quite a lot time on the straights?
SV: No, not really. I don't think we lost time on the straights. I think nothing out of the ordinary, so... No, I think it was quite tricky to get the car where I wanted it to be for one lap, and it was better in qualifying. I struggled a bit yesterday afternoon, this morning, but, as I said, by qualifying it was fine and then obviously towards the last part of quali it was a bit messy again, not ideal preparing the lap, so yeah, I'm not happy with the final attempt, it wasn't clean. So, yeah, I'm not worried, I think pace-wise it was looking quite good and let's see what we get tomorrow. Obviously a big change in terms of temps. Let's see how we adapt.

Q: (Erik Bielderman - L'Equipe) Lewis, when you don't claim the pole position, like today, do you head into the Sunday's race in a more excited mood because of the challenge that awaits you?
LH: When you're on pole, you're always the happiest, naturally - but nonetheless, yeah, I'm happy that we have a fight. I think we knew that coming here, that it was going to be challenging. We didn't know where the Red Bulls or Ferraris would be but we knew the Ferraris would be extremely quick given that they've been fastest on all the straights throughout the year. That's a big gap: seven-tenths is a huge margin but nonetheless I think in the race trim it looked like it was a lot closer. So yeah, I'm excited that I'm in a position where hopefully I can try and battle these guys tomorrow. That makes it more fun for us, for me - and for the fans, hopefully.

Q: (Godina Zsolt - F1Valag.hu) Charles, congratulations, you said a few weeks ago that Sebastian is doing a better job in terms of tyre management. Were you able to work on that this weekend, and don't you think that this could be the key to win this race tomorrow?
CL: Well, I've been analysing quite a lot Hungary. Actually, maybe it looked worse than it actually was but there's definitely some work to do on my side on this. So, we'll see if tomorrow it pays off. I changed a few things - very small things - but details always makes the difference at this level. So, yeah, we'll see tomorrow if it's any better.

Q: (Jerome Pugmire - AP) Question for Charles. Obviously you've come close to winning in Bahrain and also in Austria. Bahrain was nothing to do with you. What have you taken from those two races; those two close calls that you can perhaps take into tomorrow to give you a bit more of an edge?
CL: I mean obviously Bahrain was nothing to do with me, so not much to take from there. Austria, I think there were lessons learnt but I think I already showed it after in Silverstone, as I already speak about the aggressivity (sic) level I had with my opponents - but apart from this, nothing. I guess, at first it feels a bit weird when you are coming to Formula 1 and you do your first laps in the lead. So, the more laps I am in the lead, the more comfortable I am. And this feels good.