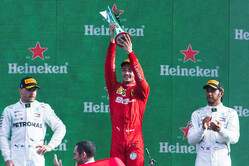 Charles, what a brilliant drive. That will go down in Ferrari legend, well done.
Charles Leclerc: Thank you so much. What a race. I've never been so tired. Can I speak in Italian? (Continues in Italian).

The great Mercedes Benz team threw everything at you, two against one, but you didn't succumb to the pressure.
CL: Yeah, I did a few mistakes but at the end I finished first. Very happy with this. I need to be careful with the mistakes but obviously none of them made me lose the position today.

Well done, brilliant race. Valtteri, the fresh tyres at the end looked quite good but not quite enough to pass young Charles.
Valtteri Bottas: Yeah, I think we had a good strategy with me and I was able to go pretty long in the first stint and that opened up some opportunities at the end. But I'm gutted, you know. I was trying everything I could to get him and there was no way past. Always when I was getting close enough I started left-front locking, because of the lack of downforce and they are so quick in the straights as well. But I tried and I think it was the best I could do today.

He was very strong off Parabolica, the last corner, wasn't he, and then down the straight, so difficult to overtake.
VB: Yeah, it was really difficult. We were trying everything we could with engine modes and everything, but not quite enough. Yep, we move on.

Third consecutive podium here but maybe not the place you wanted to be. Thanks Valtteri. Lewis, what a dice, what a battle that was! It got a bit fruity in places.
Lewis Hamilton: Fruity?

A little bit close. His elbows were coming out here and there. What would be your word?
LH: He did a great job. Congratulations to Ferrari and to Charles, he did a great job. A lot of pressure from Valtteri and I. I did the best I could, I think, but obviously following so closely for such a long time the tyres eventually just went off the cliff. Nonetheless, they were just quicker today - much quicker in a straight line, so even if we did get close we couldn't pass. Not our day but still strong points for the team. We pull away from Ferrari in the Constructors' Championship and ultimately that's what really matters.

And you must be homing in on your sixth title? It must be starting to come into range in your mind?
LH: Honestly, I'm just trying to do better each race. I'm not really focused on that at the moment. But of course, a healthier lead than I've been in in the past, so obviously I'm grateful for that. But today wasn't a perfect race. I think this weekend some improvements to be made to my set-up and obviously within myself, so I'll focus on that for the next race.

Valtteri, congratulations, you took second place with 12 laps to go. Another lap or so do you think you could have got the win today or did Ferrari have the pace?
VB: First of all, well done Charles. (General laughter, as CL is absent). We tried everything we could today as a team and personally I was giving everything I could for the win. For sure, it's annoying because it's so close - finishing less than one second behind the leader. But, yeah, at least I tried everything I could. We tried. The tricky bit was that they were so quick on the straights. It required us to be so close in the corners that it was not really possible to follow, leading the straight (sic), and also getting issues with brakes locking up once getting so close to the car ahead. I was pushing hard, so what can I say? Just not quite enough. Otherwise, it was a good race. I enjoyed it a lot, hunting for the win and the pace was pretty good especially in the second stint.

Thank you and well done. Lewis, you put a lot of pressure on Charles today. How much pleasure do you get from that race?
LH: There's not a lot of pleasure from finishing third. Going backwards is never a great thing. Still, it was a great race. He did a great job. It was nice and tight for a long time and they deserved the win - they did a better job.

(Scott Mitchell - Autosport) Lewis, during the race while you were trying to hunt down Charles, we heard a couple of times that it got a bit 'dicey' with him. There was the move at the second chicane, where he pushed you onto the run-off, and I think there was another one at the Curva Grande where you were going around the outside and he moved to the left? Was it just heat of the moment frustrations in the car or on reflection, a bit calmer, do you still think he was a bit on the limit or over the limit at times.
LH: Uhh, that's racing. Yeah, it's just racing I guess. I had to avoid colliding with him a couple of times but I guess that's how the racing is today. You just move forwards.

Thanks Lewis. Charles has joined us. Many congratulations. Second race win in the bag. It was an incredible grand prix, an incredible podium. Can you just describe the last two hours of your life?
CL: It's quite difficult - a lot going through my mind, during the race, after the race. A lot of emotions. Obviously it was very difficult during the race. Lewis was behind me. I think the biggest gap there was was maybe 1.7 or 1.8 seconds, so right behind me. I knew that Lewis rarely makes mistakes, so obviously I had to stay on it. I did a few, which never cost me a position - once was very, very close. It was crazy and then finally in the last two laps I started to believe that the win was possible. I think that with the traffic Valtteri dropped a little bit and that helped me to get a little bit of space. And then finally going on the line, I let go all my emotions through the radio. I don't think you can understand anything that I have said on the radio, but it felt absolutely amazing, and the podium also. It's going beyond all the dreams I've had since I was a child. To see so many people cheering for one team, singing all together, it's amazing.

If we were to discuss the decisive moments in today's race, was it that choice of the hard tyre at the pit stop?
CL: I don't know. I think the strategy was good. Obviously we were in a tricky situation because we had the two Mercedes behind and I was the only Ferrari and they could play the game of going long with one car and earlier with the other. It was very tricky but in the end I rthink we made ther right choice with the hard.

(Mike Doodson - Honorary) Following up on that response from Charles, I'd like to ask Mr Hamilton if he had the choice of white tyres and if they had been available would the result have been different in your opinion?
LH: I mean yeah, if I had gone onto the hard tyre I probably would have had the pace to have finished second, with a tyre that goes longer, but I wouldn't have changed the position between myself and Charles I think. They were ultimately just a little bit too quick today. I did ask in the morning if I could go to the hard tyres and they said no. They said that because we hadn't run it they didn't it was quick enough. I think the tyre we were on was quick but I did say in the meeting this morning that the tyre was potentially going to go off the cliff. It was because I was following so closely behind for so long, just really on the ragged edge, trying to get as close as I could to get in shooting distance of trying to overtake. But every time I opened up the DRS - I don't know if you were going to a different power mode - but the gap would stay the same. It's pretty incredible the speed they have on the straights.

(Peter Windsor - Clarksport) Charles, congratulations. Speaking of cliffs, I'm just wondering how your tyres were in the last 10-15 laps and how much tyre management was involved? Car looked a bit squirrelly on some corners, had a few moments, a few lock-ups. How near the cliff were you?
CL: The hard were quite difficult to manage. From the beginning, apart from the first two laps, or, no maybe a bit more, maybe three, four laps, I felt quite good, but then there was like a drop off of grip from all four tyres and then I've been struggling a little bit with front locks, and towards the end I've started to lose the rear, and that's where the performance started to... where I started to slow down a little bit. They were not in a very bad shape. I believe they could have stayed where they were for quite many laps still - but yeah, I was just struggling with the rear left especially.

(Luke Smith - crash.net) Charles, you said since Austria and the incident with Max, you changed your approach, being more aggressive. I think we saw that most clearly today in your fight with Lewis. Could you talk us through battle with Lewis, and do you think without this change in approach, you made that you would have won today's race?
CL: Obviously I think since Austria it's clear that we can go a bit further in the way that we defend and overtake and yeah, just the aggressivity of us drivers. I believe that Austria helped me to change this approach and today it's also thanks to this that I've managed to win. It was obviously very on-the-limit but... yeah, I'm happy to race like this.