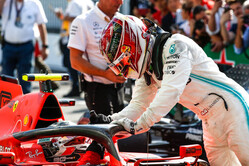 While some might describe Charles Leclerc's defence of his position as "robust" or "elbows out", others, including world champion Lewis Hamilton feel the youngster was pushing the rules to the limit, and beyond, as he appeared to squeeze the Mercedes driver off track.

While hailing Leclerc for his Monza win, Hamilton has admitted unease with the youngsters tactics and the failure of the stewards to act.

"We've just constantly asked for consistency," said the Briton. "So, there was a rule put in place, and it wasn't abided by today and they used difference consequences for the rule today but I don't really know why that was the case.

"It's motor racing, I guess, and I guess the stewards woke up on a different side of the bed this morning. I don't know."

Indeed, clearly recognising what Leclerc was doing, the stewards, who have made a number of controversial decisions this year, opted to show him the black-and-white flag, F1's equivalent of football's yellow card, essentially a warning; 'do that again and we'll come down on you'.

For his part, Leclerc argued that his defence was a consequence of what happened in Austria, when Max Verstappen forced him wide as they battled for the lead, the Dutchman escaping punishment and going on to take the win.

"I think since Austria it is clear you can go a bit further in the way we defend and overtake and the aggressiveness of us drivers," said the Monegasque. "I believe that Austria helped me to change this approach today, it's also thanks to this that I managed to win. It was obviously very on the limit but I'm happy to race like this."

Asked about the move at the second chicane, which in the eyes of many was similar to the incident in Canada for which Sebastian Vettel was penalised, he said: "I've been aware on the radio that I took a black-and-white flag for moving under braking but I'm not so sure of which move you are speaking about. If it's the one in the right hander where we were flat-out or... after that.

"To be completely honest, obviously I knew he was on the right, he braked a little bit early which I think was probably on purpose because he didn't' want to try around the outside. I thought I had left a car width. I haven't seen the images to be honest. But I was pretty sure there was a car width.

Asked if he was "unhappy" with Leclerc's tactics, Hamilton said: "I'm not unhappy, as I've said, I don't like to go backwards but he did a fantastic job today. I gave him as much pressure as I could and we had a couple of close moments, we could probably talk about it in private together but it's nothing major and we continue to race. I'm looking forward to many more races together."

"The rules remain with regards to a car's width of room," said the Australian. "It's quite obvious that Charles has squeezed Lewis and, consistent with what happened last weekend in Spa with Pierre Gasly, as a result it was the bad sportsmanship flag, or the black-and-white flag, that was displayed for the move and the squeeze in the braking area.

"For small infringements that are, let's call it, a 'professional foul' but don't go beyond the line, we'll be absolutely using the black-and-white flag more and more," he added, a move aimed allowing 'play to continue' under certain circumstances, rather than compromising the action by handing out various penalties.

"It's a sign to everyone that the driver's on notice because you only get one for the race. If you do it again, the drivers have all been advised that any other infraction will be referred to the stewards.

"If there was resultant contact we would have looked at it in a bit more detail," he admitted, referring specifically to the Leclerc/Hamilton scrap, "but effectively under the 'let them race philosophy' that the teams, the F1 Group, the drivers and the FIA have worked together on throughout the year, and giving the teams the advice at the last event in Spa, we will be using the black and white flag more often... at their request I must say."