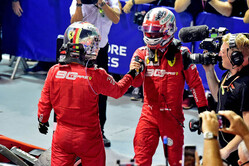 What should have been a high point of the season; it's first 1-2 of the year, Sebastian Vettel's first win since Spa 2018 and a convincing display that caught Mercedes off guard, was somewhat compromised by the controversy surrounding Ferrari's strategy and a call that left Charles Leclerc publicly questioning his team.

On lap 19, though Leclerc was leading the race, Ferrari opted to pit third-placed Vettel, with the Monegasque stopping a lap later.

When the youngster rejoined the race he was eighth, behind his teammate who was running in seventh.

From the outset, Leclerc made his unhappiness clear.

"My head is down and it will be down until the race... I just want to let you know my feelings," he said, when urged to concentrate on the race.

"To be completely honest with you, I don't understand the undercut," he said several laps later, "but we will discuss after the race."

Seeking more power in a bid to challenge his teammate, indeed "more everything", Leclerc was told to look after his engine and "bring the car home".

Speaking after the race, the youngster kept a lid on his emotions, though his face said it all.

"Obviously it is always difficult to lose a win like that, but in the end it is 1-2 for the team so I am happy for that," he said. "It is first 1-2 of the season, and all the guys deserve it. We arrived here hoping for a podium and we come back with a 1-2 so I am happy.

"I am disappointed on my side as anyone will be," he added. "Sometimes it goes that way, but I will come back stronger."

"Verstappen was ready to stop so we had to protect his position," he told Sky Sports, referring to Vettel. "It was the best opportunity for us to try and overtake Hamilton. Later on, we would have stopped Charles and the pit crew should have been free for him.

"So that was the right time to stop Sebastian... no discussion.

"Going out he drove very well on new tyres and, simply, that's racing and he has been ahead of Charles.

"We could not have stopped Charles at that stage because if you are leading the race you will not stop first," he insisted. "It was simply the proper window for Seb."

At the subsequent team press conference, he revealed that the team had considered swapping its driver's positions around.

"Did we consider to swap? Yes, we did," he told reporters. "We thought at that stage at least that it was the right choice not to do it.

"Now we are still discussing with our two drivers, was that the right choice or not? It's something on which internally we may still have a different option or discuss. But, yes, we thought about it but we didn't.

"The undercut was more powerful than expected," he admitted. "It has been 3.9 seconds, we were not expecting such a big number. As a matter of fact, when we stopped Sebastian we thought Charles stopping the lap after he would have remained ahead of Sebastian. Sebastian drove well, the undercut has been 3.9s, and that's the facts."

Asked about the fact that he had been seen in what appeared to be heated discussion with Leclerc's manager, Nicolas Todt, after the race, he said: "I told him that I know that obviously Charles is annoyed and frustrated, which is a positive attitude. If you would be a driver that's the right attitude to have.

"What I told him is that the scenarios are bigger and by the time he will understand the full picture I'm pretty sure he will quickly understand the reason for the choice.

"It's important for me that he's happy as well, happy for the team... it's a one-two. Obviously for him it's a missed win but it's been the opposite maybe in Belgium."