Wolff: Ferrari is a force to be reckoned with... always 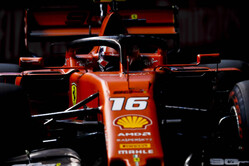 While the sheer grunt of the Ferrari has never been in doubt this season, in terms of its chassis, and particularly aero, it has tended to be circuit-specific in terms of performance.

Following the power circuits at Spa and Monza - where Ferrari took full advantage - Singapore was meant to be the Mercedes/Red Bull show, until their Maranello rivals finally let loose.

Courtesy of a number of upgrades, though it appeared to be on the back foot on Friday, come Saturday the SF90 was the class of the field, and following Charles Leclerc's mega lap that won pole, it was only an equally brave effort that saw Lewis Hamilton prevent Sebastian Vettel joining the youngster to make it an all-red front row.

Ferrari's strength, on a circuit on which it was meant to struggle, has left Toto Wolff fearing that his Italian rivals now have a car with which to make a final assault on the title(s).

"When you look at Charles' lap, it was messy," said the Austrian. "A big moment in Turn 3 and another snap during the lap. So, it's just overall that the package is powerful.

"We've got to take ourselves by the nose and say 'did we do everything right?'," he added. "And certainly the answer is 'not completely'."

Referring to the generally held opinion that Monza was the final race on the calendar where Ferrari could shine, Wolff admitted: "You always need to have Ferrari on the radar.

"They've had some pretty good races at the beginning of the season," he continued, clearly referring to Bahrain and Canada, "then it somehow fell apart, and a strong run most recently.

"When we came into this weekend I heard so many times 'you're the favourite, it's going to be between you and Red Bull and Ferrari's going to be nowhere because their car just goes fast on the straight'," he said. "I always say we try to be cautious about these things and here we go.

"It's maybe an extravagant track and a little bit of an outlier and maybe they were lucky. But I don't think so. I think Ferrari is a force to be reckoned with, always."

For once, the Austrian's underdog stance almost seems genuine.