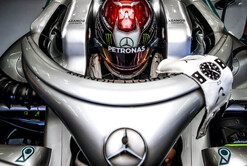 Lewis Hamilton is being investigated by the Singapore stewards after his fuel temperature was found to be significantly below what is permitted.

In a brief statement following today's opening session, it was revealed that Lewis Hamilton is under investigation.

"The temperature of the fuel intended for immediate use in car number 44, measured at 17:44 with FIA approved and sealed sensor, was more than eleven degrees centigrade (20.3 °C) below the ambient temperature recorded by the FIA appointed weather service provider one hour before the first free practice session (32 °C)," said the stewards, "this not being in compliance with Article 6.5.2 of the 2019 Formula One Technical Regulations."

The benefits of cooler fuel include a performance boost in terms of performance, the FIA having introduced its limits on cooling some time ago in an effort to prevent the teams taking advantage.