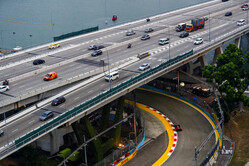 With this session taking place much earlier than any other, most notably qualifying and the race, it is pretty much meaningless as far as the rest of the weekend is concerned, but still useful in terms of a basic set-up and testing new parts.

Red Bull is strongly fancied here, and while there remains concern over Mercedes cooling issues, Ferrari also insists that it should not be written-off.

With maximum downforce required, there are a number of new front wings appearing, most notably at Ferrari.

The lights go green, and shortly after Gasly gets things underway. He is followed by Magnussen and Giovinazzi.

Aero rakes are very much in evidence.

As more drivers head out, there's a fair mixture of all three compounds - the softest in the 2019 range.

Hamilton makes an uncharacteristically early appearance, his Mercedes filling the air with the leaves that litter the track.

It's unclear whether both drivers are running the new nose, which features scoops on either side.

On the mediums, Leclerc improves to 44.723 and Vettel to 46.046. The Maranello pair have the track to themselves.

Eventually Kubica decides to join them, as the TV cameras pick up on Leclerc struggling in the twisty section between Turns 16 and 21.

Grosjean does well to keep his car out of the wall as he reports an issue with his DRS.

A flurry of sudden activity results in Verstappen going quickest (43.077), ahead of Leclerc, Hulkenberg, Vettel and Ricciardo.

Very early days but Renault appearing to maintain the form it showed in Italy.

Verstappen is on softs, as are Hulkenberg and Ricciardo, while the Ferraris are on mediums.

"Had a bit of a weird vibration under braking into Turn 18," reports Russell.

A 43.041 sees Bottas go quickest on the softs, teammate Hamilton, who is now back on track, the only driver yet to post a time.

"Check I haven't got any damage," says Vettel, "Sainz cut across and almost forced me into the wall."

Verstappen heads out again on a brand new set of softs, his team having loaded up with the red-banded rubber this weekend.

A PB is S1 is followed by the Dutchman going quickest in S2. At the line he posts 41.398 to go quickest, despite being compromised by Gasly in the final sector.

As Ferrari appears to be changing the floors on both its cars, Hamilton goes quickest with a 41.469, the Briton quickest in the first and final sectors.

Verstappen reports that his car is "bouncing massively", the RB15 throwing up a great shower of sparks as if to prove the point.

Norris is told to focus on his minimum speed in Turn 11.

At the 40 minute mark, when the extra set of tyres has to be handed back, the track falls silent. It's currently: Hamilton, Verstappen, Stroll, Bottas, Kvyat, Hulkenberg, Gasly, Perez, Leclerc and Albon.

The sound of a Mercedes subsequently fills the air, and Bottas heads out to get proceedings underway again.

Bottas, now on hards, improves to second with a 41.900, just 0.431s off his teammate's time posted on the softs. The Finn is told his "rear-left surface temp in in error".

With the track completely to himself, Bottas goes quickest with a 41.336, PBs in the first two sectors and quickest in the third.

Hamilton heads out to join his teammate.

"Data gathering on the different compounds is even more important than usual in Singapore," admits Pirelli. "With so many safety cars, you never know which tyre you might be running on and when. So it helps to have all the information to hand."

Though well down the timing sheets, the McLarens lead the way in terms of top speed, with Verstappen, Vettel, Hamilton and Russell all closely matched.

The Williams duo head out, followed a number of other drivers including Vettel.

Bottas runs wide at T7, running over the kerbs that have been newly installed this year.

On the softs, Vettel goes quickest in S1. He maintains the pace in S2, finally crossing the line at 44.479 to go top by almost a second.

A problem for Leclerc, who slows dramatically, and is only just able to make it to the end of the pitlane. The dash suggests he is stuck in 4th gear.

The youngster's session appears to be over, which is bad news for Ferrari which had been looking to carry out back-to-back tests with its two drivers.

The session is re-flagged when Bottas goes off and hits the wall at Turn 19.

"Sorry guys," says the Finn as he waits in his badly damaged car for the other drivers to pit.

Replay shows he was a little too quick and quite aggressive on turn-in, the Pirelli leaving great black trails across the track.

The car has sustained a fair amount of damage, front and rear, and it remains to be seen if he will incur any penalties.

Vettel asks if Bottas is OK. "Yes, he's OK," comes the reply, "it was slow speed." Slow speed or not, it was a significant impact, the steering wheel being torn from the Finn's grip.

The session resumes with 17 minutes remaining, Sainz is first out.

Vettel has the new floor but old nose with vertical slats as opposed to scoops.

Hamilton heads out, as Mercedes and Ferrari are both now relying on one driver.

Norris heads down the escape road at Turn 9, the Briton carrying out an impressive 3-point turn in order to get himself heading in the right direction again.

Sainz, who was hoping to have a clear track on which to make his first run on the softs, is disappointed to find that he soon has company. He and his teammate are currently 18th and 19th.

"I cannot believe it," says the Spaniard, "did you see Hamilton, he did not get out of the way." Of course, earlier in the session it was the Spaniard that cut the Mercedes driver up.

Sainz posts 42.005 to go seventh, demoting his teammate in the process.

Currently last, having posted a PB in S1, Raikkonen slows and crawls back to the pits. Alfa Romeo having previously reported an issue with its telemetry.

Having visited the pits, Raikkonen now improves to 14th with a 42.786.