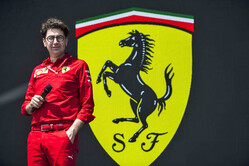 Always expected to do well in Belgium and Italy thanks to its power advantage, it came as no surprise to see Ferrari victorious in both races.

However, while many believe that the characteristics of these two circuits represented the Scuderia's last opportunity to shine this year, team boss, Mattia Binotto insists that the Maranello outfit can still challenge for wins in some of the remaining seven races.

"We knew that these ones were tracks where we may have been competitive," admits the Italian. "It was not a given, but certainly being power sensitive and having long straights it was important for us.

"It's important for us not to miss any other opportunities as we missed in the first part of the season," he continues, "and the fact that we capitalised on the strengths of our car in these two races makes us very happy.

"What will be for the next races? I think it can be as good as the first part of the season," he says. "There will be races, as in Germany, as in Canada and Bahrain, where maybe we can still be competitive, and races where the weaknesses of our car will not give us the possibilities to go for the win.

"But it's difficult to guess which one," he admits. "It's important for us to continue to develop the car, continue to understand it, try to have the best balance, and give our drivers the best opportunities whenever they come."

For much of the season, while there has been little doubt in terms of the engine, the car appeared to be the weak link, especially in terms of aero. However, Binotto believes that a significant improvement in that area played a significant part in the back-to-back victories.

"I think we should thank not only the new engine, which gives us speed and strength on the straights, but as well I think all the aerodynamic department," he says, "because the low downforce package we brought has proved to be a good one for the high speed. Certainly the speed you may have seen on the straight is not only down to the engine, but also the aero package we brought."

"There are tracks like the next one where maybe the engine is not so important," he says of Singapore. "We are working in Maranello to add some downforce. Maybe a few bits will be there."