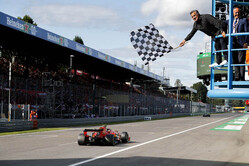 Charles Leclerc and Scuderia Ferrari sent the fans wild, as they packed out the Monza circuit in their thousands to witness the Maranello squad take a win at this track for the first time since 2010. This was Charles' second ever F1 win, coming just eight days after the first one in Spa-Francorchamps. The Monegasque spent the whole race fending off the advances of the Mercedes duo of Valtteri Bottas and Lewis Hamilton, who joined him on the podium in that order. This was win number 237 for the Scuderia, its 19th at Monza. Sebastian Vettel's day was not so memorable. He spun at the Variante Ascari on lap 6 and then had to fight his way back from last to 13th at the flag.

Charles got off the line well, leading Hamilton and Bottas into the first chicane. Sebastian found himself blocked in and that allowed Nico Hulkenberg to get ahead at the Roggia Variante. The German regained the fourth place on the next lap and began to close on Bottas. However, on lap 6, Sebastian lost control of the SF90 at the Variante Ascari and spun. As he returned to the track, he did not see that Lance Stroll in the Racing Point was coming through and the two of them collided. Vettel therefore had to pit to change the front wing, fitting Hard tyres, but the 10 second stop and go penalty he was given for the incident meant that he dropped to the back of the field.

Leclerc managed to maintain a small lead over Hamilton, up to the point when the Englishman pitted for fresh tyres, going from Soft to Medium on lap 19. The team reacted, bringing in the Monegasque next time round, taking the brave decision to send him back out on Hards. The number 16 SF90 came out just ahead of the Mercedes, but with Leclerc's tyres not quite up to operating temperature yet, Hamilton was able to attack him at Roggia. Charles defended and so a duel fought out to the thousandth of a second began. First Hamilton and then Bottas managed to close on the Ferrari, but a combination of a bravura performance from the driver, the speed of the SF90 and the benefit of the new Power Unit introduced here in Monza, along with the aero package specifically tailored for this track, meant that his rivals never really got a chance to overtake. But the battle went on for 33 relentless laps without a moment's respite.

In the final part of the race, Charles managed to fend off Bottas, crossing the line to win on the wings of enthusiasm of the tifosi who packed the stands. Bottas was just 850 thousandths of a second behind. Sebastian also stopped again, fitting the Mediums on lap 41, after which he made up six places to finish 13th. The Formula 1 World Championship resumes in a fortnight's time in Singapore.

Charles Leclerc: "There are no words to describe the emotions I felt during the race, after the race, or on the podium. It felt ten times stronger than anything I have ever experienced in my whole career. It was very special.

"When I arrive at a race weekend, I usually don't think about winning, I just try to do the best job possible and tell myself that the results will come. But to be honest, seeing all of the support from our tifosi here in Monza this weekend, the only thing I could think of was winning and that's what we did, so I am very happy.

"The race was exciting. The first stint was quite controlled, but the second stint was a bit less strong on my side, because I had to focus on the car behind me a lot as the gap was closing. It was very difficult and I had a lot of pressure on me.

"I'd like to thank the whole team for all their hard work. Nothing would be possible without them. It was a shame for Seb, who definitely had the potential to be on the podium with me. For the next few races, we have to keep our focus, our motivation, and hopefully the results will follow."

Sebastian Vettel: "It's been a good day for Charles, so congratulations and well done to everybody. Obviously my day did not go well. On lap 6 I lost the rear, which was my mistake, which is why I am not happy with my day. I got a good start, but then I had nowhere to go and so I lost the position, before getting it back again and catching up to the cars ahead of me.

"Then came the spin on lap 6 and the race was obviously ruined for me. Then I struggled to rejoin the track as I was on the grass and I couldn't see Lance.

"I still love what I do, but of course when you don't do well, knowing what you are capable of, then you can't be happy."

Mattia Binotto Team Principal: "This is probably the best podium of the whole Championship and you've got such a view of it from the pitwall that you cannot miss it. This is something you'll remember for years. It's not the first victory I have experienced in Monza, but it's something you never get used to. It's so special with all our fans and even more so after such a long race defending and battling.

"Coming here we knew we could be competitive, but we also knew there was no margin for error.

"Again today we have seen how close it is between us and our competitors and so I am happy we were first past the chequered flag this afternoon. Two wins in a row after such a difficult start to the season, really means something for the team.

"Charles drove fantastically and defended very well, making very few mistakes. If anything, pressure is a boost for him. The win is very well deserved!

"It's a shame for Seb who could have had a good race today, as he was closing the gap to Bottas. He made some mistakes, but that's Monza. You drive at such high speed and you have such a light car because of the low downforce package and braking is so difficult.

"The whole team did a flawless job, also in terms of strategy, because I think switching to hard tyres was a brave decision. It proved to be the right choice, and it paid off."