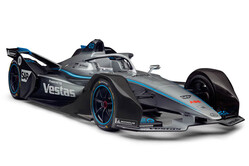 Late to the party in terms of eSports and the Netflix documentary, Ferrari has yet to follow its rivals into Formula E, even though it sees the all-electric series as a potential threat to F1.

The sixth season of Formula E will see Porsche and Mercedes (pictured) join the fray, following in the steps of Audi, BMW, Jaguar and Nissan, who have all been attracted to the series, first launched in 2014, by its green credentials and the increasing move to electric cars as more cities prepare to ban the internal combustion engine.

Based in London, Formula E's biggest shareholder is Liberty Global, which, though a totally separate company to F1 owner Liberty Media, is also headed by telecoms tycoon John Malone.

Though a stalwart of the Formula One World Championship, having contested all but 16 of the 1,011 races held to date, Ferrari is yet to be convinced by Formula E, unsurprising when one considers the Maranello outfit's iconic status as an engine builder.

And while F1's global TV audience of 490.2 million is significantly bigger than the 330 million who tuned into Formula E last year, and the 4.1 million spectators who attended F1 Grands Prix dwarfs the 476,000 that passed through the turnstiles for the all-electric series, Ferrari sees the newcomer as a threat.

In its latest annual report, the Maranello company admits that "our share of profits related to Formula 1 activities may decline if either our team's performance worsens compared to other competing teams, or if the overall Formula 1 business suffers, including potentially as a result of increasing popularity of the FIA Formula E championship".

Intriguingly, this is the first time that Ferrari has mentioned a possible threat from Formula E since it listed on the New York Stock Exchange in 2015, furthermore, the Italian company doesn't identify any other racing series as a potential threat to F1

Earlier this year, Formula E's chief executive, Alejandro Agag admitted that he wanted Ferrari on board.

"We would love Ferrari to come," he told NBC, "especially with Porsche and all the others here, it would be a great fight.

"I've invited them," he revealed, "but so far there is no news on that side. I heard nothing from them, not even an interest."