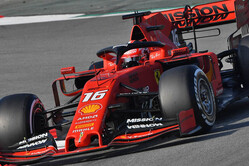 Ahead of the Italian Grand Prix, Haas team boss, Guenther Steiner, questioned whether the sport needs a budget cap while also increasing the amount of components that can be standardised.

"Don't tell us how much money we can spend and then tell us how to spend it," was essentially the Italian's message to the sport's bosses.

"What Guenther said is not a new position for Ferrari since the very start," said Binotto. "We were arguing the standardisation at first because, as he said, there is a budget cap somehow to control the costs and whatever you may do at the end you may standardise, but the budget cap, at least for the top teams, will be the level of expenditure for the season.

"We believe that standardisation may even be a risk for Formula 1 in the future," he continued, "because at first you don't know what is the reliability on standard parts at the very start.

"We had a situation, if we look back at F2 for example, of a standard clutch, for many races they simply had to start behind the safety car because the clutch was not reliable enough.

"More than that," he added, "we need to make sure that we do not have extra indirect cost by simply developing a standard component. We believe that for most of the standard components that we are proposing currently for 2021, we will all need to redesign our car, we will need somehow to make sure that whatever is the new component is properly functioning and that's extra cost.

"That maybe it's not costs that you have from 2021 onwards but it will be extra cost from now until 2021," he warned.

"We are in a similar position," admitted Mercedes', Aldo Costa. "We accept the cost cap. It is a measure that will for sure impact how our teams develop things, as Ferrari, Red Bull for sure, I don't know who else. So we accept the challenge.

"In terms of standardisation, the same concern Mattia was expressing. We need to make sure they are reliable. They will require a lot of redesign around, so we are not convinced that they will be a real cost reduction.

"The cost reduction can be negligible. But the cost cap will definitely be something quite big for the big teams."