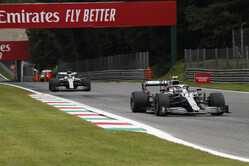 Lewis Hamilton: Practice was a bit of a challenge with the weather today; when it's raining, it's all risk and no real reward as you don't really learn a lot, so we didn't do a huge amount of running in the first session. It was mostly dry in FP2, so that was much better for everyone. As expected, the Ferraris are quite quick in a straight line, but our race pace felt strong and we seem to be a little closer on single lap pace than we were last week in Spa, so it looks like we can be in the fight. We'll go through the data with a fine comb tonight, trying to see where I can improve as a driver and also what we can tweak with the set-up, to make sure we can squeeze everything out of the car. It's going to be a really hard race on Sunday, but we seem to be close to the Ferraris which is good start to the weekend.

Valtteri Bottas: The first session was a bit messy, we couldn't work through our programme as planned, but that was the same for everyone. It was raining in different areas of the track at different times, which made it tricky to get detailed data on tyres and car behaviour, but we got a bit of a feel for the car and that wasn't too bad. The runs on higher fuel at the end felt good and the pace looked good as well, so that's promising for Sunday. However, there's still lots of room for improvements before we head into Qualifying tomorrow. We need to find the perfect set-up for our package and a good tow down the straights - that's going to be key if we want to be able to fight for pole.

Andrew Shovlin: It's been a tricky day with the rain. We didn't want to take risks with the car in the wet so stayed in the garage for most of the first session. In the second session we were late going onto the Softs so missed the best window with the track. Apart from missing some running, the day has been pretty good. We were a long way off the Ferraris in Qualifying last week and it looks a bit better here although the same trend is evident where we are losing on the straights and gaining in the corners. It's difficult to know where we stand on the long runs as rain and traffic were affecting the laps but the drivers are both happy with the balance and the tyres seem to be working well. Red Bull and Ferrari have both made significant gains in single lap pace over the last few races and now qualifying is often our most difficult session. We don't expect tomorrow to be any different; hopefully we'll be able to challenge for pole but we don't expect it to be easy.