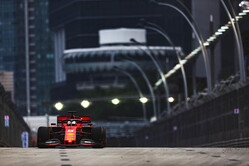 As usual, the Friday of the Singapore Grand Prix proved particularly demanding for the drivers and crew working in the paddock. It was a very long day, with the usual suffocating humidity, typical of the tropics being a factor until sunset, with the second free practice session ending at 10.00 pm. Sebastian Vettel ended the day third fastest while Charles Leclerc was sixth. The two sessions were very busy as, on top of their usual tasks, the mechanics had to change the gearbox on Charles' car in between the sessions.

Between them the two SF90s racked up 35 laps. Seb and Charles began on the hardest compound tyre posting times of 1:44.479 and 1:43.618 respectively. After their first runs, new parts introduced for this race were fitted and evaluated. Sebastian went out on the softs, setting a 1:40.426, second fastest time of the session, while Charles had to pit with the aforementioned gearbox problem after just 12 laps. Sebastian did 23. With the gearbox changed in between sessions, the team was able to investigate the cause of the malfunction.

As usual, the lap times came down in the second session and Sebastian and Charles got through their planned programme. They each did 31 laps to end up third and sixth. The German's best lap was a 1:39.591, while the Monegasque did a 1:40.018. In the second part of the session the drivers worked on race simulation, trying the various tyre compounds and different fuel loads.

Sebastian Vettel: "Hungary is the reference circuit for this track but today is maybe not the right day to compare and tomorrow will be a lot more straightforward. It was not the smoothest of Fridays for us and I think there's still a margin for improvement on the car. However our rivals look very fast, certainly faster than us.

"The soft is the tyre we don't use so much, it has greater grip but doesn't last so long. Today was not that bad and the medium tyre was not much better. However, tomorrow we focus on the softs and when it comes to the race, as usual here, we will all be trying to survive on just one stop and manage the race.

"As I said we can still improve, because the car is not yet doing exactly what I want, and in terms of balance we know where we can find some lap time. All the new parts that we brought seem to work, so let's see how close we can get tomorrow."

Charles Leclerc: "It was a rather tricky day on my side. We had an issue in FP1, so we couldn't complete as many laps as we had planned, which was unfortunate. In the second session, I didn't feel fully comfortable with the car balance or the track yet, and I think that there is also quite a bit of lap time to be gained by me improving my driving.

"We will analyse the data and make sure that we take a good step forward for tomorrow. Coming to Singapore, we knew that our competitors would be strong and that it would not be the easiest weekend for us. But it's not finished yet. We will give our all to come back stronger tomorrow."