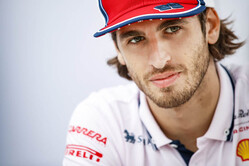 Alfa Romeo driver, Antonio Giovinazzi was handed a 10s time penalty following today's race after the Italian was deemed to have driven to close to one of the circuits cranes, and the attendant marshals, during a safety car period.

Race director, Michael Masi, had instructed all the cars to stay to the right at the incident at Turn 8, because of the crane and the marshals working on the crashed car at that location. There was a double waved yellow before the incident.

While the stewards, who reviewed video evidence and spoke to Giovinazzi and a team representative, accepted the Italian's explanation that he felt he was going
sufficiently slowly, and while he was driving to his SC delta time, they felt he ended up driving closer to the crane and marshals than was felt safe by either the marshals on location or the race director.

The Italian had been told of the location of the incident and to stay right, but may not have considered that the crane was moving, the stewards felt.

Considering this to be a potentially seriously dangerous situation and a risk to the marshals, Giovinazzi was given a ten-second penalty. However, this did not affect his race result, and consequently the Italian keeps his point for tenth.

It was a dramatic day for the youngster, who for four laps led the race courtesy of his tyre strategy and the tyre management of others during the opening phase of the race.

"I am happy with bringing home a point for me and the team," he said, "but I still have the feeling we could have finished higher up.

"We stretched our first stint on mediums longer than ideal, although it's easy to look back at it with the benefit of hindsight. Had we stopped earlier, we could have perhaps been ahead of Norris in P7.

"I was struggling at the end of the tyres' life and the clash with Daniel didn't help either, as I was left with damage to my front suspension for the rest of the race. The steering wheel pulled to one side and it was a real struggle, but I really wanted that point and I fought until the end for this position.

"Leading the race and fighting at the top against the Ferraris and Mercedes was a great feeling, and I hope someone at home took a screenshot of the standings at the time!"