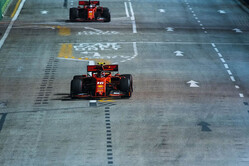 It's fair to say that this morning's session pretty much upset the formbook.

While yesterday reinforced the thinking that this weekend is all about Lewis Hamilton and Max Verstappen, both of whom were almost a second ahead of the opposition, this morning Ferrari entered the equation, and in particular Spa and Monza winner, Charles Leclerc.

And while the Monegasque edged out Hamilton, with Vettel and Bottas third and fourth, both Bulls were over a second off the pace, with Alexander Albon the quicker of the pair.

In other words, let's not write-off Red Bull too early. Indeed, let's not start bigging-up Ferrari.

The very characteristics of this track suggests that the SF90 will struggle, certainly compared to the Red Bull and Mercedes, which is why we're taking FP3 with a large pinch of salt.

That said, both McLaren and Renault have shown consistent form across the two days thus far, and there is no reason to believe that this won't continue.

Traffic has been an issue throughout, as have mistakes, which, like Monaco, rarely go unpunished.

Perez looks will take a grid penalty after damaging his gearbox is a clash with the wall earlier, and this afternoon could well witness some further mishaps.

The lights go green, but there is no immediate rush to work.

Eventually a Mercedes fires up, and Kubica gets proceedings underway. He is followed by Stroll, Raikkonen, Perez and Russell. Hamilton and Bottas are also on track, both on the medium rubber.

"I have no power, no power," warns Sainz, but moments later we're on-board with the Spaniard as he begins his flying lap.

As Hulkenberg goes eleventh with a 39.915, Vettel improves to second with a 38.374, the German making a significant improvement on his second flyer.

Ahead of the final flyers, the drop zone, as expected, comprises Williams and Haas' along with Raikkonen, with the Racing Points hovering.

The Mercedes pair are first out for the final runs, both now on the softs.

Bottas goes quickest in S1, while Hamilton can only manage a PB. The Finn maintains his pace in the second sector, only for Hamilton to go quicker. At the line Bottas posts 37.317 to go top, with Hamilton taking second with a 37.565.

The Ferraris and Verstappen have opted not to run again, as has Albon, though the Thai is currently 8th.

Green is the order of the day on the timing screen as drivers post PB after PB.

Gasly fails to improve on tenth, as Kvyat and Perez both try to improve. The Mexican goes 14th, which drops Kvyat in to the drop zone.

Bottas is first out, followed by his Mercedes teammate, with the Ferrari duo also keen to get things started. All four are on softs.

Leclerc is quickest in S1, while Hamilton has the advantage in S2, despite kissing the wall.

Norris goes fifth, ahead of Sainz, Hulkenberg and Gasly.

"I hit the wall quite hard," admits Raikkonen, who did indeed clout the barriers at Turn 14 quite hard, but is able to continue, albeit to go 14th.

An interesting radio snipped earlier had Magnussen saying that he was going to push harder on his out lap, to which his engineer replied: "I can help you with that."

As those comprising the drop zone head out, they are joined by Leclerc and Hamilton. The Mercedes is tucked right up behind the Ferrari.

Ahead of the final flying lap, Hamilton passes Leclerc for track position.

Vettel is quickest in S1, with Leclerc and the Mercedes pair failing to improve.

He maintains a strong pace in S2 also, finally crossing the line at 36.720 to go top.

Perez fails to improve and will miss the cut, as will Gasly.

Verstappen also fails to improve but is comfortably through.

Q3 gets underway, and Norris leads the way, followed by the Ferraris and Mercedes'.

Hamilton is unhappy that there are cars ahead.

Vettel wastes no time in passing Norris in order to get a clear track.

Bottas passes Sainz and sets about hunting down Norris as he too seeks track position.

In clear air, Vettel takes full advantage, setting the pace in the first two sectors and finally crossing the line at 36.437.

"I've got no front end here," complains the world champion.