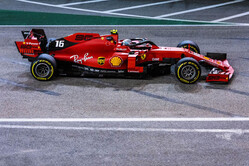 Yesterday, as expected, Max Verstappen appeared to be the biggest threat to Lewis Hamilton this weekend. What surprised however, was the gap between these two and 'best of the rest', Sebastian Vettel, almost a second.

The Italian team ran a number of updates yesterday, not least an interesting new nose, but the plan to carry out back-to-back tests was compromised by Leclerc's lack of running.

While the first session had a number of incidents, not least a crash for Valtteri Bottas and a close encounter with the barriers for Alex Albon, the second session was relatively incident free.

A technical issue sidelined Charles Leclerc for much of FP2, while Carlos Sainz was the true 'best of the rest', ahead of Nico Hulkenberg, Lando Norris and the Toro Rosso duo.

The subsequent issue with fuel temperatures on Hamilton's car, which resulted in a fine for Mercedes, suggests that the German team is aware it is under pressure this weekend.

Keeping Williams company at the wrong end of the timesheets yesterday were Haas, Alfa Romeo and Racing Point, who will all be seeking to make progress today.

As ever, traffic is proving to be an issue with a number of drivers, including Hamilton and Vettel having to abort hot laps, while Sergio Perez received a well-deserved reprimand for some silliness involving Kevin Magnussen.

The lights go green and Magnussen gets things underway, followed by Norris, Gasly and Kvyat.

As more drivers head out, softs are very much the order of the day.

Norris' car sporting a lot of flo-vis at the rear, as the evaluations continue.

A number of cars are devoid of a driver, most notably those of Hamilton, Verstappen and Vettel.

Following several minutes of total inactivity, due to the fact that the early part of this session is pretty much unrepresentative, being that it takes place in daylight, Bottas finally heads out.

The Finn, on mediums, posts the first time of the day, crossing the line at 40.926, as Albon, Giovinazzi, Kubica and Raikkonen head out.

Hamilton heads out, like his teammate he is on the mediums. Verstappen watched his progress from the Red Bull garage, the youngster yet to climb into his car.

On the red-banded rubber, Leclerc is quickest in all three sectors, the youngster posting 39.364.

"Adjust your balaclava, adjust your microphone," Albon is told. That's a new one.

Having gone quickest in S1, Vettel encounters traffic in the following sectors and finally crosses the line at 40.270 to go second, 0.906s off his teammate's pace.

As Kvyat looks set to post his first time of the day, smoke is rising from his engine cover. "Box, box now," he is told, "we have an issue."

After 6 laps, Giovinazzi reports that his rears "have gone already".

Leclerc improves in S1, but aborts the lap in the second sector as he struggles for grip.

With Verstappen yet to appear, Albon heads out again on fresh softs.

Pandemonium in the Toro Rosso garage where Kvyat's car continues to smoke.

Hamilton splits the Ferraris with a 40.129, though he remains 0.765 off Leclerc's pace, albeit on harder rubber.

Oh dear, Perez has clouted the wall at Turn 22, damaging the right-rear of the car in the process. Despite the obvious damage he is able to make the short run back to the pits.

The VSC is deployed as debris is removed from the track.

Sadly, Verstappen was on his out lap (on softs) and as a result his first run is totally compromised.

As the marshal have difficulty removing the debris, the session is (sensibly) red-flagged.

Interestingly, at the time of his mishap, Perez had just improved to fifth with a 40.985.

The session resumes with 22 minutes remaining.

Renault are straight on to the qualifying sims. Ricciardo outpacing his teammate in S1. The Australian maintain his advantage in the second sector, finally crossing the line at 40.719 to go fourth, while Hulkenberg goes seventh with a 41.011.

Quickest in the final sector is enough for Bottas to take the top spot, the Finn posting 39.166.

Moments later, despite being quickest in the final two sectors, Verstappen can only mange third (39.366), 0.200s off Bottas' pace.

A 41.156 sees Russell go twelfth, impressive stuff from the Briton and his team.

Meanwhile, at Toro Rosso, the team is to change Kvyat's power unit.

Leclerc goes quickest in the first two sectors, the youngster finally crossing the line at 38.192, almost a second up on Bottas.

With 13:11 remaining, Hamilton heads out, sporting softs for the first time today. However, moments after leaving the pitlane he spins at Turn 3.

Out of position following his spin, Hamilton encounters traffic and s forced to abort his first flying lap.

Verstappen heads out on another fresh set of softs. The Red Bull driver can only manage a PB in the opening sector. S2 sees another PB, the Dutchman finally crossing the line at 39.366, which puts him sixth, behind his teammate.

Sainz is best of the rest, ahead of Norris, Hulkenberg and Ricciardo, while the Haas pair are at the other end of the timesheets, along with the Alfas and Williams and Kvyat who hasn't posted a time.

Albon takes advantage of the escape road at Turn 9.