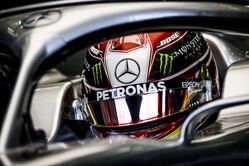 Though, courtesy of its timing, this morning's session was somewhat unrepresentative, that didn't mean it was without incident.

Having been 'cut up' by Carlos Sainz at the start of the session, Lewis Hamilton appeared to subsequently repay the Spaniard, while teammate Valtteri Bottas made a costly mistake in crashing out, causing significant damage to the front and rear of the car. "My bad," admitted the Finn later.

Charles Leclerc suffered a technical issue, which meant that both Ferrari and Mercedes had to rely on one driver for data, thereby allowing Max Verstappen to top the timesheets at a circuit where the Dutchman and his team is strongly fancied.

Leaving it somewhat late, the McLaren pair finished seventh and eighth, just behind Nico Hulkenberg, while both Toro Rosso drivers also made it into the top ten, as did Alex Albon, who finished the morning fifth.

Ahead of the green light, the big difference from earlier is that daylight has given way to the spectacular lightshow that is F1's true night race.

As the lights go green, work continues on Leclerc's car, while Bottas should soon be good to go.

Raikkonen is first out on track, followed by his Alfa Romeo teammate. The rear of the Finn's rear wing is smothered in flo-vis. While Raikkonen is on mediums, Giovinazzi is on hards.

Raikkonen gets things underway with a 43.996, with his teammate posting 46.028 shortly after.

While more drivers emerge, it's a mixture of mediums and hards, though the Williams pair are on softs.

Grosjean complains that the lights on his dash are "very bright".

Yes, George Russell in a Williams... on hards.

Ten minutes in and Bottas heads out, his crew having done a sterling job of rebuilding his car over the break.

The yellows make a brief appearance when Albon takes to the escape road in Turn 7 after a major lock-up.

A 43.144 sees Magnussen go top, as the TV director gives us one of those classic shots where we look back into the eyes of a fully focussed Vettel.

Perez (softs) goes quickest with a 41.406, ahead of Ricciardo, Vettel having had to abort his first flying lap following Albon's off.

Quickest in the final two sectors, Hamilton stops the clock at 40.685.

15 minutes in and all but Leclerc have posted times. At which point the Monegasque heads out.

Out come the yellows after Albon makes a mistake and hits the barrier at Turn 10, damaging his front wing in the process. The Red Bull driver appeared to be caught out by the bumpy surface on the approach to the corner.

Leclerc has a close encounter with Stroll, the Ferrari driver making his displeasure clear with a wave of the hand.

The Monza winner subsequently improves to third with a 40.711.

As Albon waits in the Red Bull garage as his car is repaired, Gasly goes sixth with a 41.465 in the Toro Rosso.

Still on the mediums, Hamilton is the first driver to break the 1:39 barrier, the Briton crossing the line at 39.991.

Meanwhile, another Briton, Russell, goes seventh with a 41.478. The Williams driver now on softs.

Albon is back on track, sporting softs. PBs in the opening two sectors are followed by a purple in S3, the Thai driver crossing the line at 39.943 to go top. Impressive stuff, and just what he needed to regain his confidence following his earlier mishap.

The softs are now appearing on all cars, and Verstappen takes full advantage of the red-banded rubber to go 0.986s quicker than his teammate.

Though he is only quickest in the final sector, Hamilton retakes the top spot with a 38.773.

"What's he doing there," asks Vettel of Magnussen, the German, having gone quickest in S1, losing a heap of time behind the wandering Dane in S2.

Like Vettel, Verstappen and Leclerc find themselves compromised by traffic in S2.

In the Red Bull garage, Adrian Newey oversees the set-up changes being made to Verstappen's car.

Early days, but currently this appears to be the Max and Lewis show, the pair - separated by 0.184s - are over a second ahead of third-placed Bottas.

"The traffic is horrendous," sighs Leclerc. Told he can do another lap, he replies: "They need to move out of the way though, it's dangerous like this."

Vettel improves to third with a 39.591, as Magnussen complains "what the hell" as Perez appears to be out for a Sunday evening drive, oblivious to the fact that there are other drivers on track. The Dane is lucky not to be forced into the walls by the errant Mexican when he attempts to overtake him.

Indeed, the incident has been noted by the stewards.

With just over half-an-hour remaining, Sainz is best of the rest, ahead of Hulkenberg, Norris and Gasly.

Attention turns to Sunday now as the long runs with high fuel get underway.

With an eye on the fact that the medium could be enough to make it through Q2 tomorrow, Bottas switches from the red to the yellow-banded rubber.

"What's this guy doing?" asks a bemused Norris as he is held up by a slow moving car just ahead. The driver of said car being his McLaren teammate, Sainz.

Other than the Williams pair, the Haas and Alfa duos are at the wrong end of the timesheets, as are the Racing Point pair.

While most stick with the softs, Hulkenberg and Gasly are on hards, as is Russell. Bottas and Kubica are on mediums.

Hamilton is informed that Leclerc is stuck in traffic and has been for a couple of laps.

With seven minutes remaining, Hamilton makes a race-sim stop in order to switch to the mediums. Elsewhere, teammate Bottas says he is managing his temperatures quite a lot.

A spin for Grosjean in Turn 3 brings out the yellows. The Frenchman is currently 17th. "No talking through the corners," he urges his engineer.