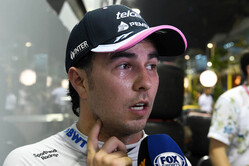 Sergio Perez has been given a reprimand for the incident involving Kevin Magnussen in today's second practice session.

The Haas driver was on a hot lap when he came upon the Mexican who, though about to begin his own hot lap, was driving slowly.

The Dane attempted to pass the Racing Point at which point Perez speeded up and moved across on to the racing line forcing the Haas towards the wall.

Having reviewed the relevant video evidence and spoken to both drivers and their team representatives, the stewards determined that both were setting up for a fast lap and were following the two Mercedes.

"At the exit of Turn 21, Perez took a line slightly to the inside of the racing line and Magnussen reasonably assumed that Perez was going to pit.

However, as Magnussen made a move to pass Perez on the right, Perez who was receiving setup instructions on the radio, started to speed up to follow the Mercedes in front of him and closed the gap between himself and the wall causing Magnussen to strike the wall in order to avoid a collision with Perez.

The stewards determined that the manoeuvre by Perez met the definition of driving "unnecessarily slowly, erratically or in a manner which could be deemed potentially dangerous to other drivers" and therefore ordered a reprimand, the Mexican's first of the year. The stewards took into consideration that they did not believe the manoeuvre to be deliberate or extreme.

"I went on the power and when I was on the side of him he closed the door and I hit the wall," Magnussen told reporters. "I don't know what was his perspective, I don't know if he went off line by accident because he was focusing on something else or whatever. But he did go off the line. I just stayed on the line and went on power to start the lap and got pushed into the wall."

However, Perez insisted that in attempting to pass him, Magnussen had broken a long held gentleman's agreement.

"Basically, there's not a set rule, but there's a gentleman's agreement," said the Mexican. "Everyone is opening up their laps. I had, I think, one of the Mercedes ahead, and I didn't expect him to try to go there.

"Some drivers they stick to the gentleman's agreement and others don't," he added, the Mexican having been involved in a couple of incidents with Lewis Hamilton in the opening session. "I think it's something we have to come up with, whether we have to implement a rule or what. It's not good to see that."

"You don't attack the guy in front," agreed Magnussen. "But he moves off the line, and you go, you're not going to ask, 'are you sure?'. You go."