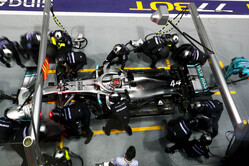 For the first time since the infamous German Grand Prix, the Silver Star was not represented on the podium, with Lewis Hamilton finishing fourth and teammate, Valtteri Bottas fifth.

The world champion put this down to poor strategy from his team, which pitted him on lap 26, seven laps after Vettel and Verstappen, six after Leclerc and four after his own teammate.

On rejoining the track he was eighth, ahead of his teammate - who had been told to ease back on his pace in a bid to hold up those behind, including Alex Albon - but behind Verstappen and the Ferraris.

"I knew that we should have undercut," he said after the race. "I kind of knew it this morning as well in the brief. I was like, 'let's just take the risk'. But they didn't.

"But we win and we lose together as a team and we all take this on our chin," he added. "It's painful for us because we could have easily won today but it just didn't work out."

Though he maintains a 65 point lead in the driver standings, and his team has a comfortable 133 point lead on Ferrari, the Briton is aware that Ferrari has now scored three successive wins.

"It feels like they are hungrier at the moment," he said. "So we've got to step it up. We've got the ability, we're still the best team but we've just got to stop dragging our feet and get on.

"We'll re-huddle and come back fighting in the next race."

Team boss, Toto Wolff subsequently admitted that the undercut had been considered, but due to the pace Leclerc was setting out front it meant there was a genuine fear that the world champion would be caught in traffic, though Ferrrari made their stops at exactly the right time.

"We discussed the undercut but there was the risk of being caught in traffic," said the Austrian. "They did it right, they had nothing to lose and I think everybody was surprised by how strong the undercut was.

"Once we got going we had a fast car," he added. "But out of the blocks, and after every restart, we are lacking pace and that's the harsh reality.

"You've got to be worried and on your toes all the time," he continued. "Ferrari have won the last three races and we cannot rest on our laurels from the beginning of the season and a solid points gap because that can catch you out."

Asked about the instruction to Bottas to slow down and essentially not attempt to pass Hamilton, Wolff admitted to feeling uneasy about it.

"It's not a great call that we made there, but the undercut was more powerful than everybody expected," he said. "I don't think that Ferrari wanted to swap their drivers, with letting Sebastian pit first. And we risked Lewis' position by keeping him out in order to protect the win.

"This is why we held Valtteri back to keep Albon behind, because Lewis would've come out behind Albon. So overall the team result would've been worse than with Valtteri doing that. We owe him that place."