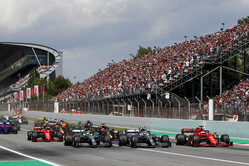 However, this season it is clear that the opposition is closing in, with Ferrari claiming three wins and Honda-powered Red Bull two.

As F1 seeks a massive overhaul of the regulations for 2021, Toto Wolff believes the sport should 'hang fire', claiming that at a time performance between the teams is finally converging it would be wrong to basically start all over again.

"Aerodynamics should still be a differentiator," said the Austrian, according to Motorsport Week, "that was acknowledged by all stakeholders around the table.

"We've got to make another loop around these regulations and have a look at them and see whether we can find some kind of compromise between what is on the table at the moment, which is very, very limited in terms of the aero development, and the other side with as much freedom as we have today.

"We have the opinion that we leave the rules alone, leave the cars like they are, and convergence is going to happen," he insists, "but I'm pretty alone out there with this opinion.

"It seems the easier call is always to change things and roll the dice and hope for better," he added, Mercedes, having mastered the engine formula, barely registering a blip in performance when the aero rules were overhauled in 2017.

"It has never happened in the past, but some teams believe maybe that throwing the dice gives them more opportunity than just getting your head down and continuing to develop."